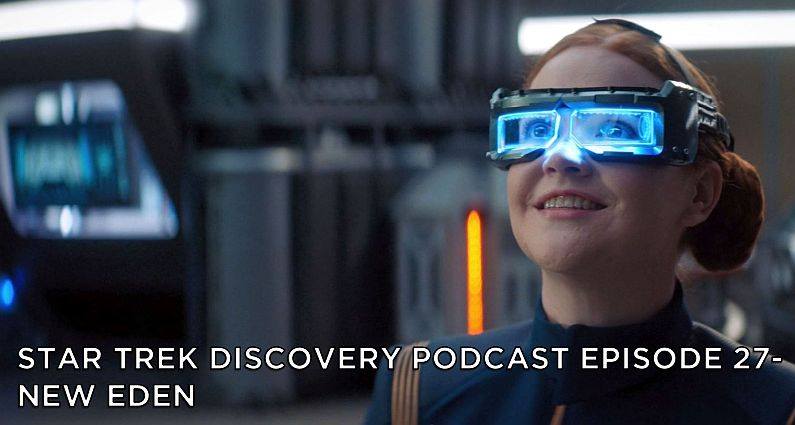 For episode 27 of The Star Trek Discovery Podcast, Ruthie and I discuss Season 2 Episode 2 of Star Trek: Discovery, which is titled, New Eden. The teleplay is by Vaun Wilmott & Sean Cochran, with story by Akiva Goldsman & Sean Cochran. It was directed by someone who should need no introduction, Jonathan Frakes, who of course played Commander William T. Riker in Star Trek: The Next Generation, and is no stranger to directing Star Trek, directed Star Trek: First Contact and Star Trek: Insurrection, and a total of 17 episodes of TNG, DS9, VOY and Discovery (including S2E9 later this season).

We start this episode with some feedback from our last episode. The talk about the spore drive seemed to hit a nerve. We explain our thoughts about it… or mine, at least, that the spore drive needs to be explained away, especially with respect to what happens with the Voyager a century later. Although I won’t detail it here, we go through our thoughts here, and I explain a theory that would explain the spore drive and everything we are seeing so far this season at the end of the episode. If you want to know much, you’ll have to listen!

Now THIS is Star Trek!

This episode advanced the Red Angel plot while feeling like a classic Star Trek story that we all remember! We start with Burnham showing Pike the drawings made by Spock that predict the seven signals months before they ever appeared.

The source of the next signal appears far away in the Beta Quadrant, 51,450 light-years from Discovery’s present position. Pike orders use of the spore drive to get there. Like before, when they get there, the signal has gone away, but Discovery finds an M-class planet that we later learn is called Terralysium, which is much like Earth, but with a radioactive asteroid belt.

Like many stories before it, the crew finds a human colony broadcasting a signal over 200 years. It appears the Red Angel had brought a group of 200 that were hiding from the bombs in a church during World War III, just before nuclear bombs were about to be dropped on them.

We end up with a “Prime Directive” story (which is called General Order 1 at this point in Federation history) about whether or not the colonists that have settled in New Eden should be told that Earth survived the war and went on to help create the Federation or allow them to evolve their own way without intervention. Unfortunately, the asteroid field is about to fall out of orbit and cause fatal radiation to the inhabitants, and it’s up to Discovery, mainly Tilly, to come up with a plan, and the rest of the crew to carry it out.

So far, Tilly’s Short Trek has been the one with the most ties to the season. Her eagerness to do well in the Command Training Program causes her to take unnecessary risks to capture a piece of the asteroid to create an interface to interact with the spore drive.

We meet May, who Tilly later figures out is an old friend from Musk Junior High (I incorrectly called it Musk Middle School during the episode) that had passed away five years earlier. I believe May will play a part in this season going forward. Is she in the mycelial network? How did she die?

Pike seems to be settling in nicely!

We love Pike!!! Anson Mount is playing the captain we knew little about, but in a way like we always knew him. What a great presence he has. He seems to understand the how to behave in this religious community, and questions whether this is divine intervention or not (at least that would have been how the people saw it). I thought he was great in this episode, as we get to know this honorable and honest captain, about a 180 from Lorca! He seems to be settling in nicely, including a new ready room.

That’s it for New Eden!

We’ll be back in a week with our next episode. As always, your feedback is essential to this podcast! We’ll be having a short feedback deadline most weeks this season, due to scheduling issues. We’ll cover more feedback from S2E2 New Eden, so do not hesitate to send in your feedback if you miss the deadline. For Star Trek: Discovery S2E3, which is titled Point of Light, so get your feedback in by Friday, February 1, 2019, at 6 PM Eastern/5 PM Central or 11 PM UTC. You can submit feedback via the feedback page, Facebook Group, Twitter, or call the voicemail at (216) 236-5449 and leave us a message there. Make sure to mention you’re calling The Star Trek Discovery Podcast when you call.