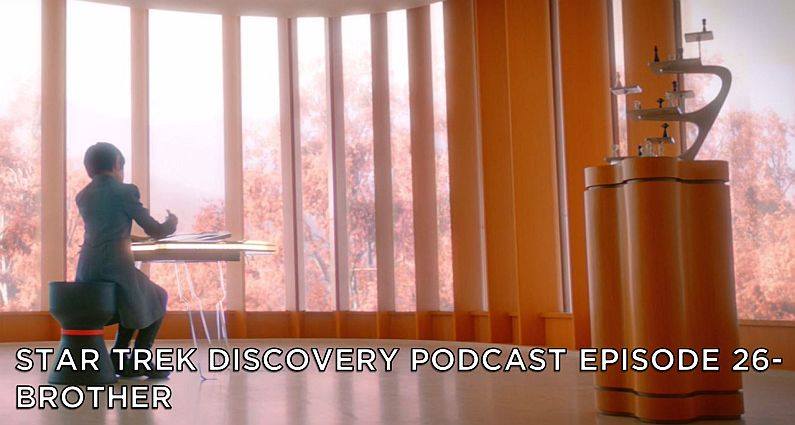 For episode 26 of The Star Trek Discovery Podcast, Ruthie and I discuss the Season 2 premiere of Star Trek: Discovery – S2E1, which is titled, Brother. It was written by Ted Sullivan & Gretchen J. Berg & Aaron Harberts (the latter two were the showrunners at the time this was filmed), and it was directed by the current showrunner and co-creator, Alex Kurtzman. We both loved this supersized movie-like premiere! If you haven’t given Discovery a try, this epic episode is one you can jump right in!

If you’ve seen TOS (“The Cage” and “The Menagerie”) or the Kelvin Timeline films – specifically “Star Trek” (2009) and “Star Trek Into Darkness” (2013) – you are probably aware of Captain Christopher Pike, who captained the Enterprise before Kirk took command, but we didn’t know about his stint as the captain of the Discovery, while the Enterprise underwent extensive repairs after suffering severe ship-wide system failure. Pike takes command of the Discovery to investigate seven red bursts throughout spread out across more than thirty thousand light-years, but he considers it “shared custody” with Saru. Pike makes this episode, and if this episode is any indication, Pike will quickly become a fan favorite, if he isn’t already!

They Have Stepped It Up

This episode looks like a blockbuster movie! It looks every bit as good as the three Kelvin Timeline films. There have been reports that Berg & Harberts lost their showrunner jobs in part because the first three episodes went way over budget. I was skeptical of this report until I saw this first episode. When I said it looks like a hundred million dollars was spent on this episode, I wasn’t exaggerating. I know it wasn’t, but the quality of the visuals has far eclipsed what we saw in Season 1, which was already made it one of the best looking TV shows going.

In addition to our cover image, Fred from The Netherlands also provided us with some images from Brother! Thanks again, Fred!!!

If you watched the first Short Trek, Runaway, you may have noticed a resemblance between Po and Commander Nhan. I know I did, enough that I had to check to see who played Nhan. Well, Fred thought Nhan was a Xahean, like Po. However, it’s been determined that she’s a Barzan, the aliens who tried to sell rights to the Barzan wormhole in TNG’s Season 3 episode, “The Price”. This first couple of images focus on Nhan, and how she compares to the Xahean leader, Po and the Barzan leader, Bhavani.

Here’s a great pic of Captain Pike, just as Discovery is about to be taken out of warp.

Lastly, here’s a split-screen of the four pod pilots getting into their craft.

The Niggling Result of Not Going Forward in Time

Discussion about the look and feel of Star Trek: Discovery vs. TOS and the TNG era came up again a couple of times during this episode, though it was discussed in the roundtable last week. I was going to elaborate here what was said, but I’ll just say you should listen. I’ll also say that I had a lot more to say about it the previous episode. Ruthie got to say her piece in this episode since she fell off the call last week before we got to this topic.

That’s it for Brother!

We’ll be back in a week – hopefully, less – with the next episode. As always, your feedback is essential to this podcast! We’ll be having a short feedback deadline most weeks this season, due to scheduling issues; we had to extend the deadline this past week at the last minute. We’ll cover more feedback about the premiere next week if it comes in; do not hesitate to send in your feedback if you miss the deadline.

For Star Trek: Discovery S2E2, which is titled New Eden, the deadline to get in your feedback to make the current week’s podcast is Friday, January 25th, 2019 at 6 PM Eastern/5 PM Central or 11 PM UTC. You can submit feedback via the feedback page, Facebook Group, Twitter, or call the voicemail at (304) 837-2278 and leave us a message there. Make sure to mention you’re calling The Star Trek Discovery Podcast when you call.