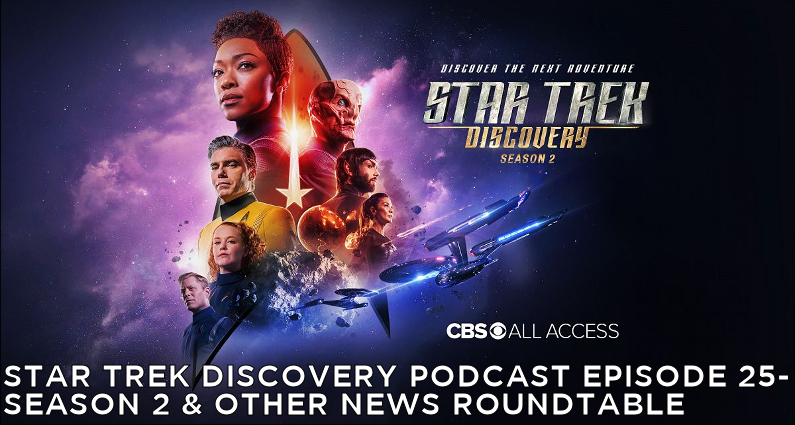 Our Star Trek: Discovery – Season 2 Preview (and Other News) Roundtable!

As we get ready for Star Trek: Discovery Season 2, Ruthie and I sat down for a marathon preview session with Steve Brown of the Panels to Pixels Podcast (Steve’s third roundtable), Wes Huntington of the Minnesota Star Trek Nerd Podcast (Wes’ second roundtable), and new panelists John McGrail of GSM’s Maid of Steel Podcast and Martin Donison of GSM’s Arrow Squad Podcast, Tomorrow’s Legends (@tomorowslegendsFacebook Group), and Sibercast (@Sibercast and Facebook Group) to discuss the Short Treks, news about the Picard series and Lower Decks, discuss other possible shows (including one that has since been announced) and then discuss what we expect for Season 2.

The Short Treks in Review

Opinions were varied between the six of us as far as which Short Trek was our favorite and which was our least favorite of the Short Treks. I would call that in and of itself a success, as they appealed to us differently.

I’ve brought down bigger men than you, Picard!!!

Sorry, that was a line from The Drumhead… Most of us are really waiting in great anticipation for the new Picard series, with one of us more tepid in our reaction to it. We react to all of the news that’s been coming out about the show, especially within the last week.

I think we should go down to the Lower Decks in Section 31!

The reaction to the animated comedy series Lower Decks was a little more reserved than the Picard reaction, though generally positive. Some felt better about it after the Harry Mudd Short Trek, as that Short Trek was written by the creator of the animated show. We talk a little here and there about the Section 31 series with Georgiou, which was just a rumor at the time. Since we recorded this on Friday, January 11th, CBS All Access has announced that the show is a go! Some of us look forward to it, and others aren’t too thrilled. We also talk about other shows that have been rumored but not yet official and others we speculate/predict may be on the horizon (including one I’m predicting).

Are you going to talk about Discovery?

After a while, yes, we finally got to Discovery. Since they’ve never been on the podcast before, we get Martin and John’s impression of Season 1, and talk about Pike, Spock, Georgiou, among others, and what we’re hoping for from Season 2.

That’s it until Season 2!

So, for the season premiere, Star Trek: Discovery S2E1, which is titled Brother, the deadline to get in your feedback to make the current week’s podcast is Friday, January 18th, 2019 at 6 PM Eastern/5 PM Central or 11 PM UTC. You can submit feedback via the GSM Feedback page, Facebook Group, Twitter, or call the voicemail at (216) 236-5449 and leave us a message there. Make sure to mention you’re calling The Star Trek Discovery Podcast when you call.