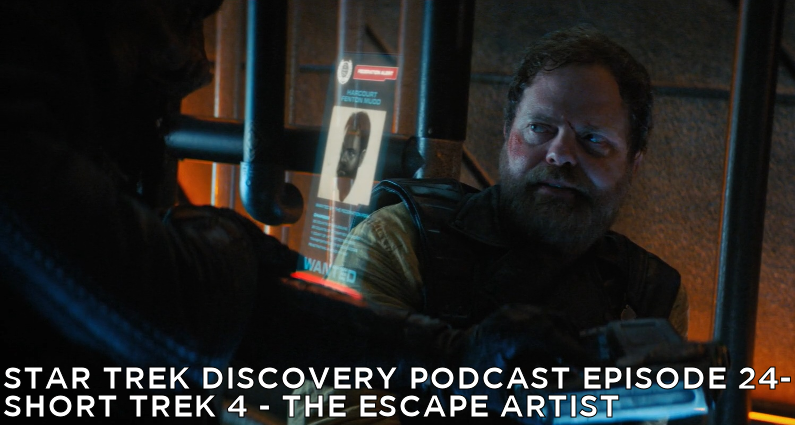 Ruthie and I are back with the fourth and final Short Trek before Season 2 of Star Trek: Discovery! This Short Trek is titled The Escape Artist. It was written by Mike McMahan, who is the showrunner of the new Star Trek: Lower Decks animated series, and it was directed by Rainn Wilson, who also starred in this short.

I didn’t have a lot of expectations for this Short Trek, but with a brilliant teleplay and Rainn Wilson’s incredible performance both behind and in front of the camera by Rainn Wilson, I will have to say that this was my favorite Short Trek of the four! We both loved it!

Ah yes, jipper!!! If you haven’t been able to see this Short Trek, you may wonder what the deal is with jipper. Well, it’s a drink, one that doesn’t exist yet, but I predict we’ll hear of someone inventing a jipper soon! Sipping jippers on a beach somewhere was the punchline of this story and a big part of what made this short one of the funniest Treks ever!

We have a comparison image from Fred from The Netherlands this time around. This compares the android shots in I, Mudd, using three sets of twins, and this episode, with the many versions of Rainn Wilson.

No more After Treks?

We also covered some news that is not being reported by the other podcasts or news websites yet. It appears that After Trek is not coming back for Season 2. It was announced back in June that it was being “reimagined” for Season 2, but After Trek has been removed from CBS All Access, both in the standalone app/website and on the CBS All Access Channel on Amazon Prime. If you’re watching internationally via Netflix, and if you’re watching on CraveTV in Canada, you still have access to it, at least for now.

Matt Mira, the former host who hosts the popular Star Trek: The Next Conversation podcast, announced on his show that the show is not returning and for Season 2, and that he is not under contract with CBS at this time. He’s offered to return should they need him. It may come back later in Season 2, or for the Picard show, but for now, it’s canceled. Matt implied on his podcast for Patreon subscribers that the budget overruns that caused (at least in part) former showrunners Aaron Harberts and Gretchen J. Berg their jobs were probably the reason why After Trek was canceled. Also, he didn’t find out about getting the hosting job until the Thursday before his first show just a few days later. That explains a lot.

That’s it for The Escape Artist!

So, that’s it for this mini-episode! We both loved it! We’ll be back with our Season 2 Preview Roundtable in a few days!

Looking for our RSS Feed? Not anymore! Want to participate? Join our Facebook group! And follow us on Twitter! And don’t forget to subscribe to us on Apple Podcasts! While you do, we’d appreciate it if you can leave us a review, hopefully, a 5-star! Or, if not, a rating will do!!! And we’re now on Spotify!