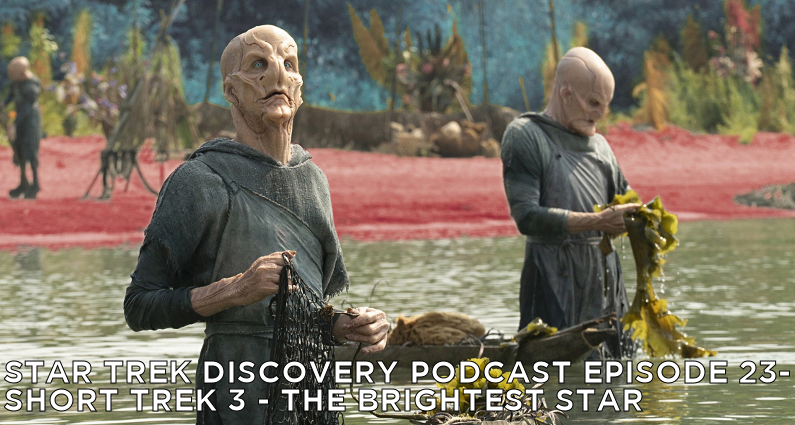 Ruthie and I are back with the third Short Trek! We recorded episodes for the first three Short Treks on Tuesday, December 18th in back to back to back fashion, and this is the final episode that we recorded that night. This Short Trek is titled The Brightest Star. It was written by executive story editors Bo Yeon Kim and Erika Lippoldt, and directed by co-executive producer Douglas Aarniokoski.

This is the first Short Trek that I would consider an origin story. This one focuses on our favorite alien commander, Saru! Well, he’s at least the favorite alien for one of us. As such, Ruthie didn’t care for this episode as much as I did, as she’s not a big fan of his character and/or species, which she finds confusing. I understand that sentiment, as I was expecting more backstory on the prey aspects of his species, and his height, super speed, strength and especially his threat ganglia. I came up with a theory on how this evolved. His species was hunted, probably by the Ba’ul, but that Mirror Universe saying about scared Kelpiens make tough Kelpiens plays in here.

The hunt made Kelpiens less tasty, so a system evolved to make them live in a more idyllic surrounding, and that they didn’t live with that fear their whole life. As I’ve said on the podcast many a time, I HATE the term “headcanon”, so I’d prefer to consider this speculation and not anything that can be used as “gatekeeper” material. Speaking of an origin story, are we to believe that the reason why Saru’s species are called Kelpiens because they eat and/or harvest kelp? Really? That’s a little on the nose, don’t you think?

Why did she take a shuttlecraft?

I was very pleasantly surprised to find out that Lieutenant Georgiou was the one that rescued Saru from Kaminar, and that totally fits the Saru/Georgiou/Burnham dynamic, and why he was so hurt that he didn’t get to serve as the first officer under her. The appearance of Michelle Yeoh was very unexpected in any of these Short Treks, so I was very happy to see her. However, with that in mind, I did not understand part of that aspect of the story. Was there a reason why she took a shuttlecraft down to pick up Saru and not beam down to get him? This seems like the Prime Directive is under effect here, as the Kelpiens are not a warp-capable species, and we see Siranna see the shuttle as it leaves the planet, so this didn’t make sense to me.

As promised, I’ve included images Fred from The Netherlands sent us from his trip to Toronto last year, which showed scenes used in this Short Trek!

That’s it for The Brightest Star!

So, that’s it for this mini-episode! I loved it, but Ruthie just thought it was fine. We’ll be back in the first or second week of January with the final Short Trek, which is titled The Escape Artist. Send in your feedback!

Looking for our RSS Feed? Not anymore! Want to participate? Join our Facebook group! And follow us on Twitter! And don’t forget to subscribe to us on Apple Podcasts! While you do, we’d appreciate it if you can leave us a review, hopefully, a 5-star! Or, if not, a rating will do!!! And we’re now on Spotify!