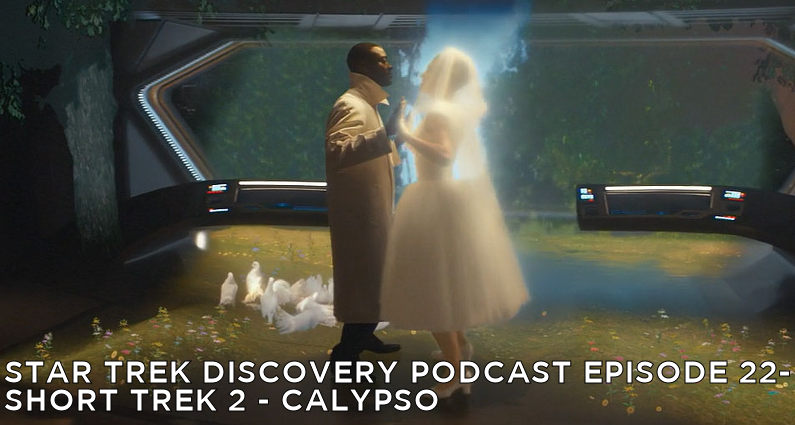 We’re finally back! Ruthie and I are back with the Short Treks! We recorded episodes for the second episode covering one of the three so far released Short Treks on Tuesday, December 18th in back to back to back fashion. We will have one more coming in a few days! Calypso’s story was by Sean Cochran and Pulitzer Prize award-winning writer Michael Chabon, who is also one of the executive producers of the new Jean-Luc Picard series, who also wrote the teleplay. It was directed by Olatunde Osunsanmi.

This Short Trek gives you an idea of what might be possible within this type of story. We see no characters from Star Trek: Discovery, except for the USS Discovery itself. Instead, in a story similar to one in The Odyssey, we meet a new character, Craft, rescued by the sentient USS Discovery computer in the 33rd Century, or so it suggests. She calls herself Zora.

Zora wants to keep Craft there, a character we may never see again, but later realizes she has to release him so he can go home to his wife and child. It hints of an enemy called the V’Draysh. Many people, myself included, have speculated are The Federation. It was an interesting short, with many questions about how the ship got there, who ordered it there and how long it has been there. Why has it been undisturbed all this time, and how did Zora evolve? Perhaps it’s later than the 33rd century? Maybe Discovery was sent there by Section 31? We may never know. The performances of Aldus Hodge and Annabelle Wallis, who played the voice of Zora were great, and both of us enjoyed this Short Trek very much!

That’s it for Calypso!

So, that’s it for this mini-episode! We’ll be back in a few days with the next Short Trek, titled The Brightest Star.