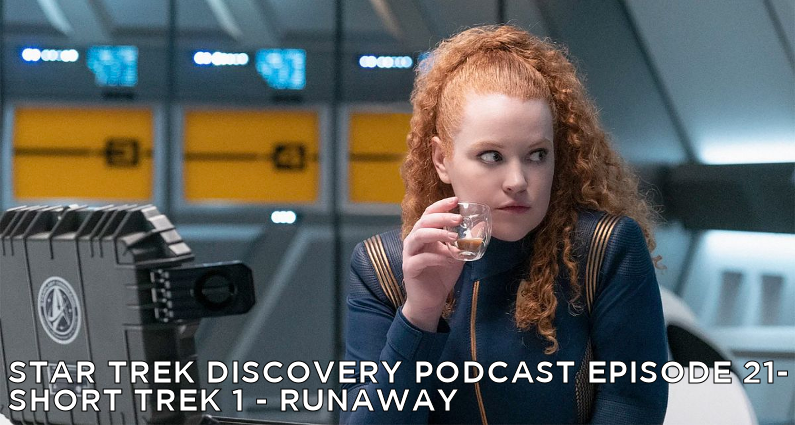 We’re finally back! Ruthie and I are back with the Short Treks! We recorded episodes for the first three Short Treks on Tuesday, December 18th in back to back to back fashion. We’ll be releasing them a few days apart over the holidays, so you can have time to listen to each of them before you get the next one! This time, we have the first Short Trek, titled Runaway.

A Runaway favorite, if you love Tilly!

Who can REALLY have a bad thing to say about this Short Trek? It features our favorite cadet, now an ensign, Sylvia Tilly! Ruthie and I both say that Tilly is our favorite character, and Mary Wiseman shows why Tilly is a favorite for so many viewers!

OK, I did have a bad thing to say about the Short Trek. I had one issue with the episode, and that is the Runaway herself, Po, and her Xahean species in general. I didn’t have any problems with Yadira Guevara-Prip’s performance, but the way the character changes over the course of 15 minutes was not believable to me. In fact, I really didn’t like the episode because of it, on the first watch. On repeated watches, though, it became less of an issue, but it was still enough to take the rating down a couple of points. Listen to the episode for more. I also have a potential explanation for “the born at the same time as the planet” thing. Some might call that “head canon”, but if you’ve ever listened to us, you KNOW how I feel about that term!

I found it to be an odd choice that they showed Tilly’s mom in the form of a hologram, but didn’t show her face! Why did the producers and director decide to do that? Was Mimi Kuzyk, who played the character, just temporarily cast in that role, or is there some other reason for it? It was very weird and a bit off-putting.

That’s it for Runaway!

So, that’s it for this mini-episode! Ruthie loved this episode more than I did, but I still liked it a lot. We’ll be back in the next few days with the next Short Trek, titled Calypso.