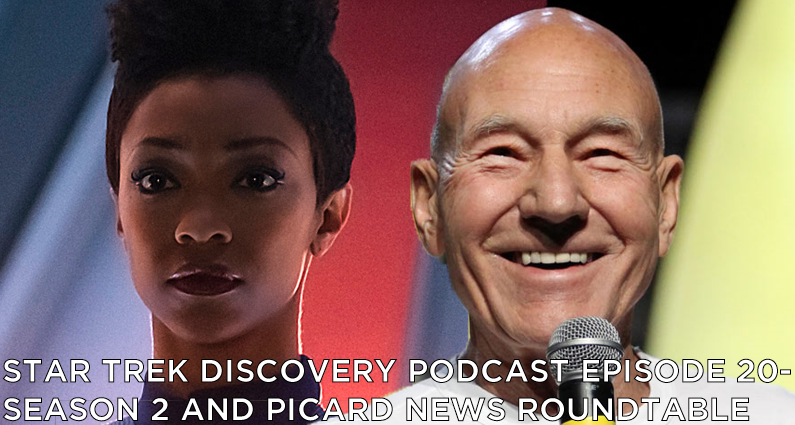 It’s finally time for us to bring you our long-awaited Season 2 News and Picard Show Roundtable!!! Recorded on September 8th, Ruthie and I were joined by two past roundtable participants – Mark Des Cotes from Solo Talk Media, and Steve Brown of the Panels to Pixels Podcast, and two new participants – Mark Deal and Wes Huntington from The Minnesota Star Trek Nerd Podcast. We had some recording glitches during this episode, including some we didn’t know about at the time. More on that later.

We start with the news…

We reacted to the former co-showrunners Gretchen J. Berg and Aaron Harberts being fired from the show for both budget concerns and abuse in the writers’ room. We discussed the announcement of Alex Kurtzman becoming the new showrunner and James Duff later made an executive producer and probable next showrunner. Then, we reacted to the casting announcements of Anson Mount as Captain Christopher Pike, Rebecca Romijn as Number One, and, most recently, Ethan Peck as Spock.

Most of us had seen the trailer (one exception… and you’ll have to listen to find out who hasn’t), but we talk about the trailer and our reactions to it. We also talk about what we would like to see in Season 2.

Jean-Luc Picard… Is Back!!!

After that, we then spend a good deal of time discussing last month’s announcement at Star Trek Las Vegas that the next Star Trek series will be focused around Jean-Luc Picard. We reacted to that announcement; we dissected some of what Patrick Stewart said about the show is and isn’t, and we speculated what the show will be about. What we think some of the other shows might be was also discussed.

We finally get to some undiscussed feedback!!!

Ruthie and I finally go through some feedback that came in after the end of the season. We recorded that feedback separately, so the other panelists do not participate during that section of the podcast.

We STILL didn’t cover EVERYTHING…

The “Short Treks“, four shorts covering short stories within the Star Trek: Discovery universe, were not covered in this roundtable. In hindsight, we probably should have. On September 20th, CBS announced that the first of these Short Treks – a Tilly story called Runaway – would be released on October 4th. This would be followed by shorts in November, December, and January. We will definitely be covering the Short Treks next time. A few days after we recorded, CBS CEO Les Moonves resigned amidst allegations of sexual harassment, and since he’s been the driving force behind CBS All Access, I’m sure we will have more to say about this next time. We also didn’t talk much about the existing characters, some of the people involved in the Picard show, like Pulitzer Prize-winning author Michael Chabon, who also wrote one of the Short Treks, TNG cast talking about the Picard show, and I’m sure there’s more! We did cover a lot though!