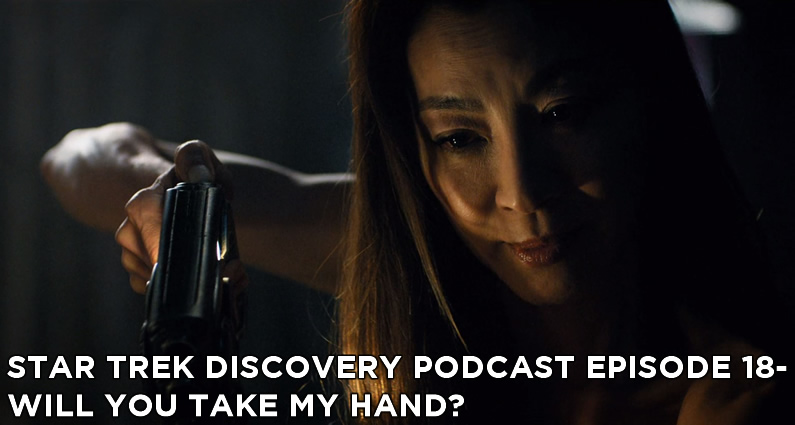 Star Trek: Discovery – Season 1, Episode 15: Will You Take My Hand?

There was a lot to say about Star Trek: Discovery S1E15, which is titled Will You Take My Hand? It was a season finale, after all, right? In fact, like last week, it took extra time to get this episode to you as a result.

Fred from The Netherlands shared more pics again this week, showing us more wonderful use of lighting in the season finale! I have used one of those pics as the featured image for this episode, and a couple more below. If you want to see them all, you can see Fred’s image collection from the episode here.

It seems that not all Starfleet captains from the Mirror Universe are good at hiding in plain sight! During his time in the Prime Universe, Lorca was able to pass himself as a Federation captain, albeit with some unconventional tendencies. Emperor Georgiou, on the other hand, doesn’t even TRY to hide her true self, despite Admiral Cornwell installing her as the long thought dead Captain Georgiou. The way she conducted herself on the Bridge was quite shocking, but also right in character. I was a bit surprised that she survived the episode, but when I think of the possibility of her as this crew’s longtime antagonist, like a Q, Gul Dukat or even Daniels, it makes me giddy! I still wonder if she will end up an agent of Section 31, or running the whole thing. Maybe she’ll try to start a new empire? Who knows, but I look forward to seeing her again!

Yup, that’s right!!! At the end of this episode, Discovery answers a distress call from… you guessed it… the USS Enterprise NCC-1701!!! Now, in this era, sometime around the Kirk is not the Captain of the Enterprise yet. Instead, his predecessor, Captain Christopher Pike, is the Captain. However, Sarek’s son and Burnham’s adopted brother, Spock, does serve on this era’s Enterprise. We can only hope we’ll see this Enterprise in Season 2. Will Zachary Quinto reprise his role, or will they cast someone else as another version of Spock? And will it be Bruce Greenwood, who plays Pike in the 2009 and 2013 reboot films, reprising the role, or will it be someone new? What about the enigmatic Number One, who was played by the late Majel Barrett in The Cage (the original TOS pilot)? Some called the appearance of the Enterprise as fan service, and Ruthie is a little trepidatious on how this might affect canon next season. I say bring it on!

Did The Producers of Star Trek: Discovery Stick The Landing?

Yes, with an ending like that, I think they definitely did stick the landing, albeit too much fan service for some… However, taking the gymnastics term to the full analogy, you not only need to stick the landing but do a flawless routine. Although there was a lot great in this episode, especially Tilly, I think it fell short on several levels. This finale felt tacked on, oversimplified, and a tad forced. Where the producers had intentionally planned to end the season with the death of Lorca and the Discovery returning to the Prime Universe, these last two episodes weren’t quite as good, and this one only getting back a lot of the high marks solely on the last ten minutes, and especially the last minute or so, followed by the incredible rendition of the Alexander Courage original theme over the end credits. Fan service? Perhaps, but I loved it!!!

That’s it for Will You Take My Hand?

So, that’s it for this episode! We both loved this episode but not as much as we did the other episodes this half-season! I am very impressed with the show, but I’m a bit stepped back from the thought that Star Trek: Discovery might be the best show I’ve ever seen. After this finale, I don’t think I can say that now. That said, it was a great first season, with several flashes of genius. I can’t wait to see what Season 2 will bring! Thanks again go out to Fred from The Netherlands for supplying us with the featured image this week! Check out this link for more pics from the episode!

And don’t forget to subscribe to us on Apple Podcasts! While you do, we’d appreciate it if you can leave us a review, hopefully a 5-star! Or, if not, a rating will do!!!