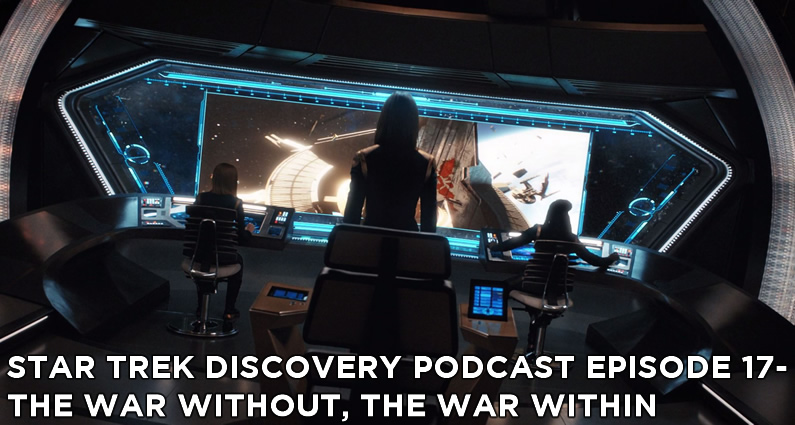 There was a lot to say about Star Trek: Discovery S1E14, which is titled The War Without, The War Within. In fact, it took extra time to get this episode to you as a result.

More about Season 1, Episode 13: What’s Past Is Prologue

We got more feedback about last week’s episode, which was a big one! Before we get into the discussion, we share that feedback.

Fred from The Netherlands shared more pics again this week, showing us more wonderful use of lighting in this series! I have used one of those pics as the featured image for this episode, but I am not going to feature the rest here, since it takes the extra time it to create the blog post when I do, and you’ve had to wait long enough! You can see Fred’s image collection from the episode here.

The War Without, The War Within, The War Goes Badly For The United Federation of Planets…

Soon after the pseudo-ISS Discovery becomes the USS Discovery again and rejoins its own universe, albeit nine months later than when they left it, we see Cornwell and Sarek forcibly take over the ship. They make Saru subject himself to a mind meld from Sarek. That was something you wouldn’t normally see a Federation Admiral and Ambassador do! You could see that they were pretty freaked out. We learn that Captain Killy’s ISS Discovery was destroyed in the Prime Universe, so they thought that Discovery was no more. We know things are bad when they are trepidatious of the Discovery warping to Starbase 1. Cornwell’s reaction to the 80,000 people gone from the starbase, probably many if not most of them dead, and a damaged base, tells you all you need to know. The Federation is losing badly, and with them installing Emperor Georgiou to captain Discovery, impersonating her doppelganger, that can only mean they are desperate, to the point where the very tenets of the Federation may have to be ignored to continue its survival. However, is there ANYONE out there who thinks this is a good idea??? This has BAD IDEA written all over it.

The War of Lorca’s Legacy

Lorca, or the shadow of him, is all over this episode. If you had any doubt, Lorca (Mirror version) was a jerk. A real jerk! By jumping into the Mirror Universe before transmitting the cloak breaking algorithm, he has doomed the Federation, taking them to the brink of annihilation. Would Cornwell, the former psychiatrist, prescribe shooting up Lorca’s remaining bowl of fortune cookies? For me, this was a highlight of the episode.

The War of Fan Expectations

I thought that The War Without, The War Within would either have time travel in the episode or set up a time travel episode for next week’s finale, to correct the timeline. The finale may still go that way, but it doesn’t look like it will be now. The show continues to keep me guessing, and I love that about the show.

Speaking of the finale, it’s going to have to address several elements of the story. We know there’s no spore drive going forward. The war with the Klingons, though we know very little about it according to canon, seems to be going worse than makes sense from what we know of the Federation in TOS. Those are the most glaring examples, but there are more. I will assert to listeners one last time to wait on judging the show on those matters until the finale. I have faith that they will be addressed, and if they aren’t, it will undermine the season and the show as a whole.

The War of Duets

This episode had a couple of 47’s. The first one is given to us in the first stardate recited by Cornwell: 4798.6. However, that stardate is way out of sync with the stardates we have in this series so far, and is even ahead of the stardates seen in the original series. We also heard the computer issue that the spore terraforming progress of Stamets is at 47 percent! I know it’s dumb, but it’s a little thing that ties it to Trek of old!

So, that’s it for this episode! We both loved this episode (me even more after another watch after we recorded), and we can’t wait for the finale on Sunday! Send in your feedback by 6 PM Eastern/5 PM Central/11 PM Eastern, Monday, February 12, 2018. Thanks again go out to Fred from The Netherlands for supplying us with the featured image this week! Check out this link for more pics from the episode!