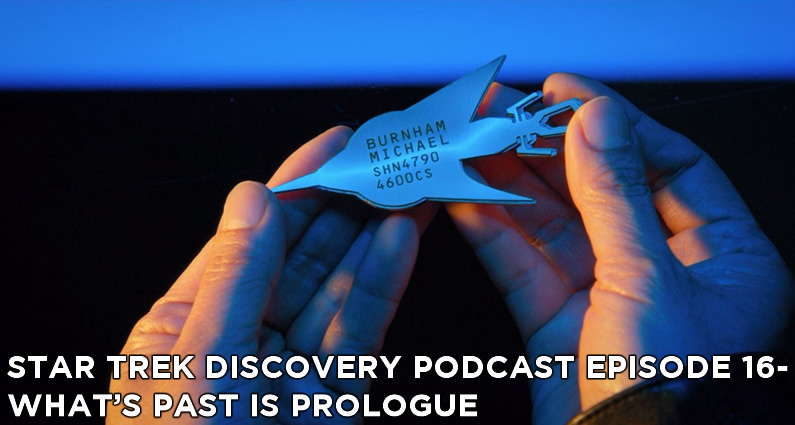 A lot happened during Star Trek: Discovery S1E13, which is titled What’s Past Is Prologue. So if you haven’t watched the episode, Ruthie and I would suggest you stop reading this now. HUGE spoilers are ahead!!!

Fred from The Netherlands shared more pics again this week, showing us more wonderful use of lighting in this series! I am not going to share all of them this week, but if you want to see them all, you can check them out here.

We both loved this episode, but… upon further reflection…

See what I did there??? 🙂 I often go back and re-examine my impressions of certain episodes, and I am starting to do that now with What’s Past Is Prologue. During our recording, I gave this episode a 9.8. After thinking about this episode more, I still love this episode, but I’m not so sure I’d give it such a high rating now.

I am a little disappointed by Lorca’s behavior, and to a lesser extent, his demise. Here is a guy who has been brilliant, even genius, with his ability to work an elaborate plan to get back to his universe. He has been extremely adept manipulating people and events in both universes, though at times showing he may be a megalomaniac and is probably a sociopath.

Not so brilliant in his own universe…

Once he got home to the Mirror Universe and revealed his true self, his brilliance waned. Why is he so single-minded in wanting to have Burnham by his side? He doesn’t even make a really good case why she belongs in the Mirror Universe with him. Her life sentence in the Prime Universe? Fate or Destiny? Fate may explain SOME of what has happened to him, but he should also realize that his actions have had something to do with it, too. For example, he could have stayed in the Prime Universe and been just fine, and once the war was over, maybe even thrived, but he was too hellbent on claiming an empire (I should have played my “You Blew It” clip). During the final battle, he took his eye off of Georgiou and paid for it with his life.

Forget his goatee… Where was his mustache to twirl?

So, while I love the character, he didn’t seem to learn much from his experiences in the Prime Universe and seemed more brilliant in Prime than Mirror. Once he was was back in his own universe, he became a bit of a mustache-twirling, Bond villain, without the mustache or goatee but with a big racist, isolationist bent!!! 🙂 OK, I’ll admit, the Mirror Stamets kill wasn’t too Bond villain-like. I’ll keep the rating for now, as I have a feeling we’ll learn more about Lorca before the season is out, but my rating may change once the season is done. I will miss Jason Isaacs on this show. I think he’s deserving of an Emmy nomination. He’s probably done as a character, unless…

Will Discovery go back to “Save the Whales”?

Discovery’s success returning to the Prime Universe, but returning nine months later, meaning that the rest of Starfleet never received the Klingon cloak breaking algorithm. It appears that the war has gone very badly for the Federation, and when you take Star Trek canon into consideration, it has possibly gone TOO badly. Could the Discovery go back in time to change the war? Could they go back in time before the war? Or could they go back in time to stop Lorca? Maybe they’ll go back in time and meet the REAL Prime Universe Lorca and change the timeline so the Spore Drive is never invented? Who knows? In case you don’t recognize that plot, “Save the Whales” was a Star Trek IV: The Voyage Home reference.

Burnham makes a surprising decision, at least somewhat, and saves Emperor Georgiou, and she is brought to the Prime Universe. I was surprised, even though I predicted it! 🙂 I know they have a connection, but the Emperor is not Captain Georgiou. Will Georgiou salivate when she sees Saru? Will she attempt to take over the Federation and make it her new empire? Or, will she change, now that the Empire is gone for her? There’s no way to know, but I’m really interested to see where the story goes with her. In many ways, the Klingons of this universe are like the Terrans of the Mirror Universe. Speaking of that, we didn’t see Tyler/Voq or L’Rell this episode, but I’m guessing we will next time.

I am so proud of Saru! In this episode, he was the Captain we have been expecting all along in this show! What a speech he gave! I hope that he gets the full promotion to Captain of the Discovery. Also, we finally get to see the crew work as a team! We see many of those bridge officers that have been in the background – Airiam, Detmer, Rhys, Bryce, and Owosekun – finally with more to do and say. Hopefully, with “Captain Mirror” gone, maybe they will finally get more representation on the show.

I was wrong during our recording. There WAS a 47 shown in What’s Past Is Prologue. Georgiou shows us Burnham’s Mirror Universe badge, and her ID number has a 47 in it.

Now we know what that big ball is!!!

No, it wasn’t a small star… It was the Terrans exploiting the Mycelial Network and taking power from it. I don’t know how much we talked about it in the episode, but it was a bit of a classic Trek allegory of our use of fossil fuels and the environment.

We see Stamets in the Mycelial Network and Culber guiding him. I hope we’ll see more scenes between them. We also see the demise of Mirror Stamets. Let’s hope that I’m wrong and that he won’t survive the season. I don’t think that will happen, but it could. I think that would be a mistake.

That’s it for What’s Past Is Prologue!

So, that’s it for this pictorial of this episode! Thanks again go out to Fred from The Netherlands for supplying us with these pics! And check out this link for more! We can’t wait for the next episode! For our next episode where we discuss Star Trek: Discovery S1E14, titled The War Without, The War Within, please get in your feedback by 6 PM Eastern/5 PM Central/11 PM UTC on Friday, February 2, 2018.