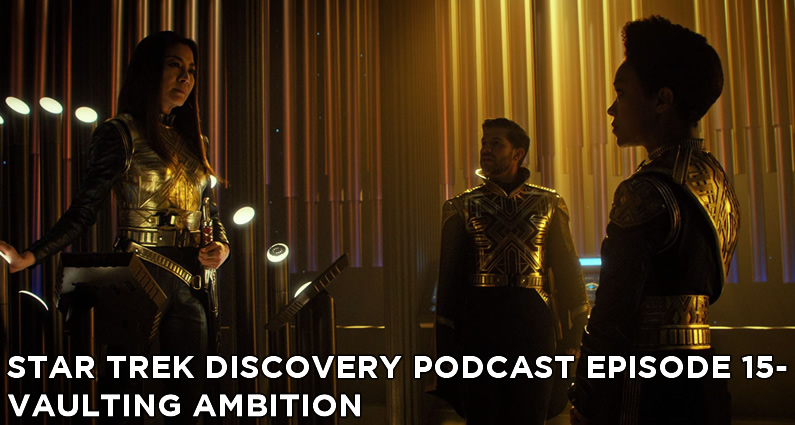 Ruthie and I discuss Star Trek: Discovery S1E12, titled Vaulting Ambition. Our heroes continue to try to make it back home from the dog eat dog Mirror Universe, but get in deeper and deeper. Don’t read further if you haven’t seen the episode, because there are HUGE spoilers ahead!!!

Fred from The Netherlands shared more pics this week, showing us more wonderful use of lighting in this series, specifically this episode! I share them with you throughout this blog post!

Michael, I am your mother!!!

We learn something that I hypothesized during the last episode, that Emperor Georgiou is Burnham’s mother in the Mirror Universe. This made a lot of sense, and when we found out that Georgiou was the Emperor and Sarek didn’t seem to know Burnham last episode, that was a piece of the puzzle that fit into place.

We learn that the Kelpiens are more than slaves in the Mirror Universe! They are also lobster!!! EWWWWW!!!

Not much of a trade…

Burnham reveals to Georgiou that she’s from the Prime Universe. It seems that the Emperor wants to keep the Prime Universe a secret, in this incredible scene, where she uses something that’s a cross between a shuriken (ninja flying star weapon) and a fidget spinner, leaving just the new Governor of Andor, Burnham and Emperor Phillipa Georgiou Augustus Iaponius Centaurus! Burnham trades the plans on the Displacement Activated Spore Hub Drive for her life. I guess they don’t have in the Mirror Universe? If that’s true, what’s Mirror Discovery got? Will we ever find out?

You can’t be two people!

We can say that about a lot of characters in this episode, but this is especially true for Tyler & Voq. We get more information from L’Rell as far as how Voq was transformed into Tyler, which we believe the real Tyler is deceased, killed during the extraction process. I loved the Saru and L’Rell scenes, and Saru really stepped up as Acting Captain this episode. We see a struggle within “TyVoq” (remember Tuvix?) that has to end with one possibly at its end. We’re still a tiny bit confused on this point. It looks like the Voq consciousness dies here, we think, but we aren’t 100% sure. Did L’Rell kill Voq intentionally? By accident? Or did something else happen? We’ll have to find out more next week.

In this episode, we learn something that many of us suspected, and Mark from Solo Talk Media theorized a couple of episodes back, that Captain Lorca, all this time, is really from the Mirror Universe!!! This show has had some big reveals, but this creates a paradigm shift in this show that explains SO MUCH of what we’ve seen. As much as we suspected this might be the case, the reveal that all Terrans have the same light sensitivity. On AfterTrek, they published a video that shows us all of the clues that have been there the whole time! Fred didn’t give us a Lorca pic, but here’s that video… By the way, I’m not sure if this can be seen everywhere or if just the U.S., so be warned!

The relationship between our Stamets and the departed Dr. Culber is explored during Stamets’ coma. Was Culber just a figment of Stamets’ mind, some remnant of Culber that still exists in the network or something else? Either way, I loved the scenes between them.

And what’s with that Palace ship???

What the heck is that thing in the middle of the Imperial flagship/palace, the ISS Charon? Is that a little sun???

That’s it for Vaulting Ambition!

So, that’s it for this pictorial of this episode! Thanks again go out to Fred from The Netherlands for supplying us with these pics! We can’t wait for the next episode, which is Star Trek: Discovery, Season 1 Episode 13, What’s Past is Prologue. Get in your feedback by 6 PM Eastern/5 PM Central/11 PM UTC Friday, January 25, 2018.