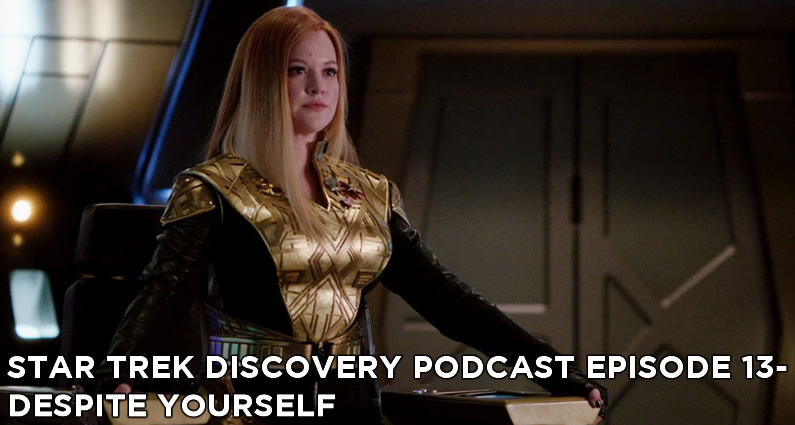 On this episode of The Star Trek Discovery Podcast, new co-host Ruthie and I discuss the mid-season premiere of Star Trek: Discovery, S1E10, titled Despite Yourself. In the long-standing tradition, we find out that the USS Discovery has traveled to the Mirror Universe, after not knowing where it ended up last time. We both LOVED this episode!!!

Mirror, mirror on the wall, who’s the Emperor of them all?

So much happened in this episode! We discover that Burnham is the Captain of the ISS Shenzhou, or at least was before being presumed dead. Lorca is a fugitive in this universe, and although he captained the Buran as he did in the prime universe, was never captain of the ISS Discovery. Instead, Tilly is the captain, and she has earned several nicknames for her command, including Captain Killy.

Who’s Got a Secret?

We learn more about the Tyler/L’Rell situation, and it gets really complicated, while we lose a valued member of the crew as a result.

Please submit your feedback to the next episode, Star Trek: Discovery S1E11, titled The Wolf Inside. Please remember to subscribe to us on Apple Podcasts. Subscribing to us helps us move up in the rankings, so it’ll help us out tremendously! You’ll also get new episodes when they’re released. And while you’re in there, leave us a rating or review! It only takes a few minutes and it also helps us out! Want to participate? Join our Facebook group! And follow us on Twitter!