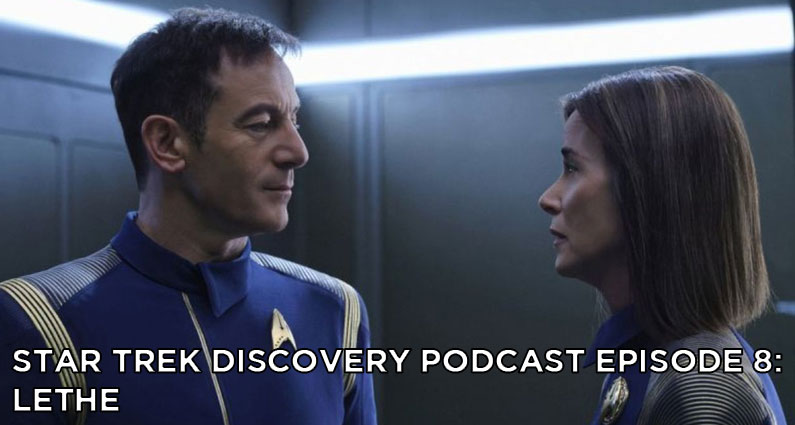 On this episode of The Star Trek Discovery Podcast, Adam and I discuss Season 1 Episode 6, titled Lethe. This episode was a bit of a departure from the long story arc we have seen so far from this series. Although some of what happened in this episode will continue on through this season, it felt very self-contained, almost episodic.

We learn a lot more in this episode about the complicated relationship Burnham has with Sarek. Burnham’s application to join the Vulcan Expeditionary Group was rejected, not on its own merit, but because Sarek was forced to choose between Burnham and Spock. Only one would be able to go. Sarek chose Spock, but Spock decided to join Starfleet instead. He never revealed that to Burnham and reflected upon this with regret as he lay dying on his ship.

According to Wikipedia, Lethe means “oblivion”, “forgetfulness”, or “concealment” in Classical Greek. The episode title suggests concealment, as Sarek concealed the truth about why Burnham’s application was rejected. It also fits Lorca concealing his true psychological condition to Starfleet. Cornwell discovers his PTSD, but before she can do anything about it, she is abducted by the Klingons. Unlike his unsanctioned rescue of Sarek, Lorca decides to play it by the books and wait for instructions, probably to hold onto his command.

One thing this show was… it was trippy!!! The mind-meld was trippy. The nebula itself was very colorful and trippy. The Formerly uptight, Stamets is now the mellow Chief Engineer as a result of his spore drive encounters. Very trippy, indeed!

We thought that this episode was not as good as previous episodes, especially last week. I thought it was still decent, while Adam didn’t care for it, and thought it was his least favorite so far. Nevertheless, we can’t wait for next week!