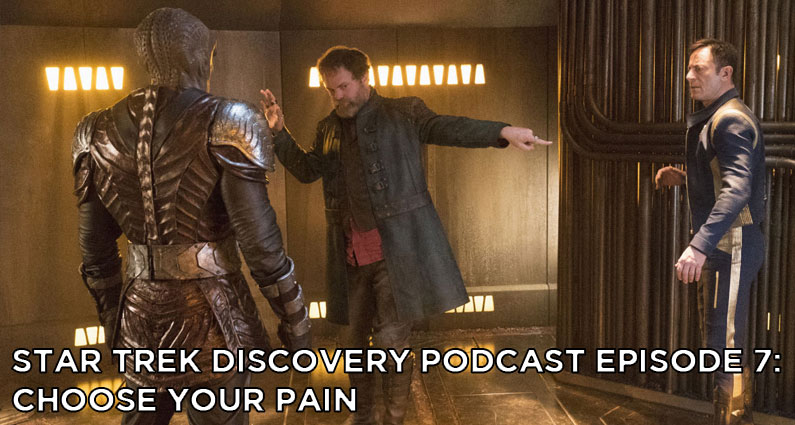 Adam and I discuss Season 1 Episode 5, titled Choose Your Pain. Our characters deal with the pain they are causing the tardigrade. Lorca has been taken and then tortured by the Klingons; and we come across the final main cast member, Lieutenant Ash Tyler, and meet an old character in Harry Mudd.

We also see the Klingon L’Rell again, who has moved up and is Captain of her own ship. The reveal of her having Tyler as a prisoner for seven months bring me more questions about Tyler, and makes me wonder about Voq. Could they be one and the same?

It wouldn’t be the first time we see a Klingon be altered to appear human. We see this in The Trouble With Tribbles. Now, I am not sure enough about this possibility to declare him a spy, but I will be paying attention to this character going forward.

We also enjoyed the Saru scenes, especially with him dealing with his resentment of Burnham and the continuation of the tardigrade story.

We both thought this was the best episode so far, and can’t wait for next week!

Please leave your feedback for Star Trek: Discovery, Season 1 Episode 6, titled Lethe, by 6 PM Eastern/5 PM Central on Monday, October 23, 2017. One of the best ways to submit feedback is on our Facebook group.