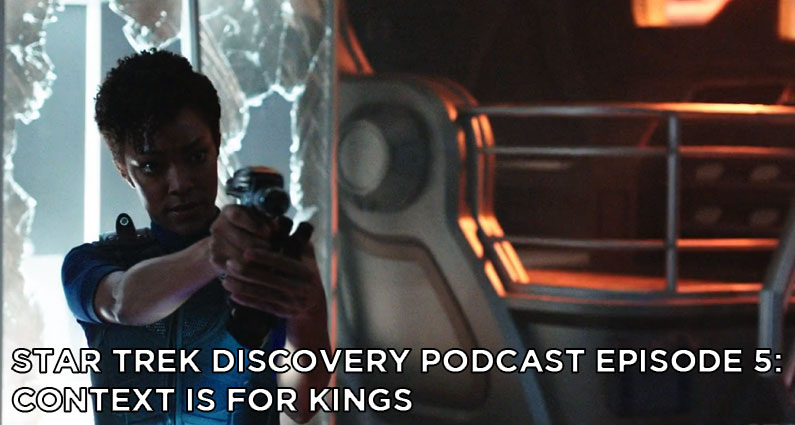 Talking Through Context is for Kings

On this episode of The Star Trek Discovery Podcast, we analyze Season 1 Episode 3 of Star Trek: Discovery, titled “Context is for Kings”. We finally get to see the U.S.S. Discovery. We finally have Burnham join the NCC-1031, after two episodes on the Shenzhou under less than ideal circumstances.

What about the ship?

We didn’t talk a lot about the ship during the episode, so what do we think of it? Well, it’s cool! It looks way better than it did in that original teaser back at Comic-Con 2016. We’re excited to finally see it. We said last time that this is not your father’s Star Trek, and I would also say that Discovery is not your father’s Enterprise. Keep in mind there’s been 51 years since the original show. Technology in 2017 has advanced considerably since 1966. If you want Star Trek to continue for future generations, my advice is don’t get too hung up on it. From what we can see, they are sticking to story canon pretty well… for the most part… and we think that is most important.

We have a bit of a mystery as to what’s going on with the Discovery. That may play a bit different than your “problem of the week” did back in the ’80s and ’90s, but, for a long-form serial, this has almost as many mysteries as Westworld did.

We get to meet new characters in this episode, particularly many from the main cast, such as Stamets, Tilly, and Captain Lorca. Each is much different than you may expect. We both loved Tilly, though one of our listeners didn’t agree. Stamets was not what I expected. Lorca’s going to be an interesting character, and I have tons of questions about his menagerie.

We also meet Chief of Security, Commander Landry. Although not on the main cast, I think we’ll be seeing a lot of her for the rest of the season. We also see the sister ship, the U.S.S. Glenn, and a familiar pet of the Captain.

We both loved the episode, and can’t wait for next week!

Please leave your feedback for Star Trek: Discovery, Season 1 Episode 4, titled The Butcher’s Knife Cares Not for the Lamb’s Cry, by 6 PM Eastern/5 PM Central on Monday, October 9, 2017. One of the best ways to submit feedback is on our Facebook group.