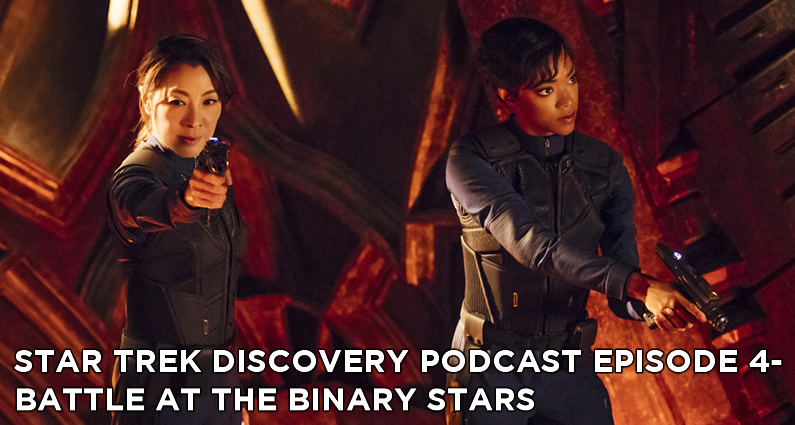 Talking Through Battle at the Binary Stars

On Sunday, September 24th, CBS All Access made available S1E2 of Star Trek: Discovery, titled Battle at the Binary Stars, immediately following the airing of S1E1, The Vulcan Hello, on CBS. Since many people in the U.S. didn’t have CBS All Access and still don’t, they want to know: Should they watch this show? Should they pay for CBS All Access? Should they wait, and binge it, or buy it now and watch week to week? We answer those questions, at least most of them, in this week’s episode.

In this episode of The Star Trek Discovery Podcast, we analyze Season 1 Episode 2 of Star Trek: Discovery, titled “Battle at the Binary Stars”. We also discuss, after the first two episodes, our experiences so far with CBS All Access, and give our advice about watching each week, waiting and binging or not watching at all. Read More…

Star Trek: Discovery is not your father’s Star Trek. You know the uniforms and the Klingons look different, but it goes beyond that. The producers have changed a lot more, added a few new wrinkles to some things, and created new things within the universe. But, is it still Star Trek? I believe the answer is yes. If you can accept some changes to what you’re used to, then this Star Trek is for you. If you can’t accept that their uniforms are anything except what you see in “The Cage”, and that the bridge doesn’t look like a classic bridge a la NCC-1701, then move on. Stick to Kirk, Spock, and McCoy.

Though the producers have been coy about it, I believe that Star Trek: Discovery is a partial re-imagining of the franchise. They’ve kept story canon, for the most part, but they have changed the look and much of the technology. They could have saved themselves a lot of grief by announcing this as a re-imagining of the franchise, or by not changing as much as they did. I’m still scratching my head as to why they felt it necessary to change the look of the Klingons so much, but it is what it is. I hope it may be explained, but the most important part is that they still act like Klingons, and if they had changed their behavior, I would be objecting a lot more than I am now.

So, should you watch Star Trek: Discovery?

We believe the answer is yes. We think it will be a great season, and great TV, but different than the Trek we grew up with. Should you get CBS All Access? We think so… but whether you wait and binge, or watch weekly, that’s up to you; whether you don’t want to be spoiled online because you haven’t seen it, want to share with the online community as it airs, or you’re more than comfortable binging it and watching later is a major determining factor. However, if you’re waiting for it to come onto another streaming provider in the US, like Netflix, think again. CBS is building their whole streaming service around the Star Trek franchise. This is going to become more commonplace, not less, with other content providers. It’s unlikely, though not impossible, that Discovery will be available on Netflix in the future. If that happens, it won’t be soon.

What about the episode itself? SPOILER ALERT!

This episode ends with a few major twists. Captain Phillipa Georgiou and T’Kuvma are dead, the Shenzhou has been destroyed, the Federation and the Klingon Empire are at war, and Burnham has been court-martialed and received a life sentence. We’ve not even seen the USS Discovery yet! “The Vulcan Hello” and “Battle at the Binary Stars” play together like a 2-hour TV movie prequel. It’s like the rest of the season will be a 13-episode telling the actual story of Season 1. The show has a lot of potential with no way to know where the story’s going from here. Things have been entertaining, but it’s difficult to know exactly where this story’s going. Hopefully, that will come a little more clear next episode, but we’re hanging on for the ride!

Please leave your feedback for Star Trek: Discovery, Season 1 Episode 3, titled Context is for Kings, by 6 PM Eastern/5 PM Central on Monday, October 2, 2017. One of the best ways to submit feedback is on our Facebook group.