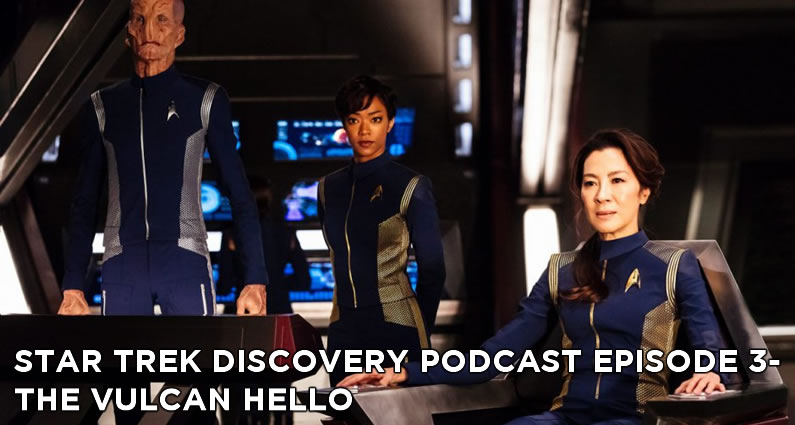 Talking Through The Vulcan Hello

It’s been a long wait, but Star Trek: Discovery is finally here!!! For this episode of The Star Trek Discovery Podcast, Adam and I cover the pilot, Season 1 Episode 1, titled The Vulcan Hello. Overall, we’re cautiously optimistic, with some enthusiasm on some things and nagging issues on others. We’ll cover Season 1 Episode 2, titled Battle at the Binary Stars, later this week.

The verdict’s still out for some

We know some of you, especially in the U.S., are undecided as to whether or not you will watch the show. Perhaps you will wait until you can binge-watch it before you pay the monthly fee, or maybe you want to wait and see what people think of it before committing to yet another bill. If you are in Canada, have the show available on Netflix or have decided to pay for access in the U.S. now, perhaps you are going to watch it weekly like we are. I’m not going to write this post to try to get you to sign up, but if and when you do, we’ll be here for you!

Overall, we’re cautiously optimistic, with some enthusiasm on some things and nagging issues on others. When we recorded Monday night, I had not yet seen episode two, but I have now. Some of my opinions changed after that episode. Some changed for the positive, and a few for the negative. On the whole, I am pleased and can’t wait for next week’s episode! However, I’m still asking why they made the changes they did. I’ve decided to just accept them and watch the show based on its own merit.

We’ll be back in a few days!

We will be recording again Thursday night, covering Season 1 Episode 2, “Battle at the Binary Stars“. If you want to get in feedback, one of the best ways to do that is via our Facebook group.