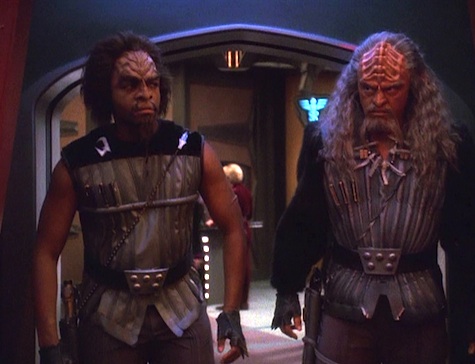 Hello Star Trek fans! Welcome to Season 5 episode 21 of Rebinge Deep Space Nine: Soldiers of the Empire where we bounce from Ferengi nonsense to Klingon honor! This week we spend a lot of time on a smoky, dark Klingon ship with melodrama, drinking and hand-to-hand combat. And in great news, we welcome back recurring character Martok played by J.G. Hertzler who coincidentally just appeared on an episode of Star Trek Lower Decks!

Soldiers of the Empire

When Martok is called upon by the Klingon empire to locate a missing Klingon ship, he finds himself in an unfamiliar position: he is cautious and afraid! Turns out his time in the Jem’Hadar internment camp had some lasting effects on the grizzled general. But never fear, Worf is here to remind him of his warrior heart! How’s that for Klingon melodrama?

Please listen to some of our favorite episodes like Duet, The Visitor or Rejoined or our VERY SPECIAL episode: Star Trek First Contact. And be sure to listen to our previous episode S5E20: Ferengi Love Songs.

Join us next week for S5E22: Children of Time.