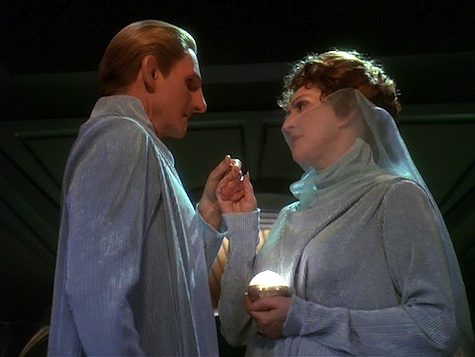 Hello Star Trek fans! Welcome to season 4, episode 20: The Muse where Lwaxana Troi turns up with a big surprise and a creepy alien preys on Jake’s writing talents. Even though the creepy alien is supposed to be the muse, we also learn that Lwaxana has had a similar muse-like impact on Odo! There are some surprises in this wildly underrated episode and also some genuine “ewww” moments. It’s always nice to see a guest appearance from Majel Barrett-Roddenberry, but we also have an interesting performance from Meg Foster as the alien.

In this episode a creepy alien turns up and starts sucking the life force out of Jake while supposedly turning him into a great writer. Maybe it wouldn’t be so bad if she didn’t also rub it all over herself while hiding out with him in the bowels of the station. I mean this is gross. Meanwhile, Lwaxana Troi turns up pregnant and in need of help from Odo who in this episode surprises himself when he examines their relationship. Turns out he kind of digs her.

Please listen to some of our favorite episodes like Duet, The Visitor or Heart of Stone and check out the previous episode, Shattered Mirror.