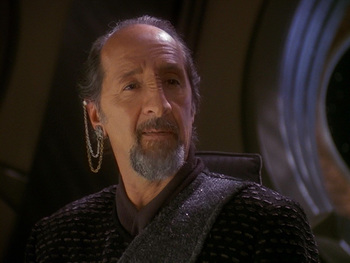 Hello Star Trek fans! Welcome to season 4, episode 16: Accession where Sisko has to face (again) his role as Emissary to the Prophets. While he’s kind of settled uncomfortably into the role, he’s also very happy to take an out when he sees one. Guest star Richard Libertini turns up as a blast from Bajor’s past.

In this episode the wormhole spits out a 200 year old light ship that holds the Emissary…wait a minute we already have one of those! Sisko quickly hands the role over to the new guy, but it’s clear the “new” guy has a lot of very old ideas and he wants to take Bajor back to their caste system of the past. Not only is this bad news for Bajor’s entry to the Federation but it’s pretty much bad news for anyone who wants make decisions about their own lives. This brings an immediate crisis to Kira and her future on the station. Time to have a chat with the Prophets!

Please listen to some of our favorite episodes like Duet, The Visitor or Heart of Stone and check out the previous episode, Bar Association.

Join us next week for S4E17: Rules of Engagement!