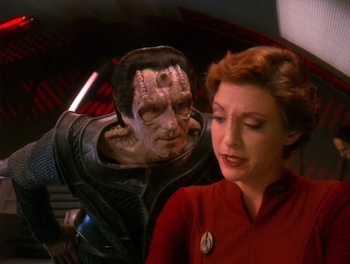 Hello Star Trek fans! Welcome to season 4, episode 13: Return to Grace. It’s another episode of Kira forced on a mission with that jerk Gul Dukat! Kira must just want to punch this guy every time she sees him, yet she keeps getting paired with him! And of course, he is his usual unpleasant self (I mean what else would you expect). And while the episode has an appearance by guest star Marc Alaimo, the podcast has an unexpected appearance of Pooky the cat. You’ll just have to listen in and see where she pops up.

Dukat has arrived to escort Kira to some far off summit (much to her distaste) – oh how the mighty have fallen from military “great” to ferry driver! One good thing on this mission is Kira gets to hang out with Ziyal, Dukat’s half-Bajoran daughter. But every other thing that happens is bad. Not only do they end up in a battle with a much more powerful Klingon ship, but Kira has to endure dinner with Dukat. Gross. Dukat continues to hit on her and try to schmooze her. So Kira spends her time not only trying to vomit over the grossness of Dukat, but also trying to help the Cardassians think differently. They are no longer the strongest fish in the pond.

Please listen to some of our favorite episodes like Duet, The Visitor or Heart of Stone and check out the previous episode, Crossfire.