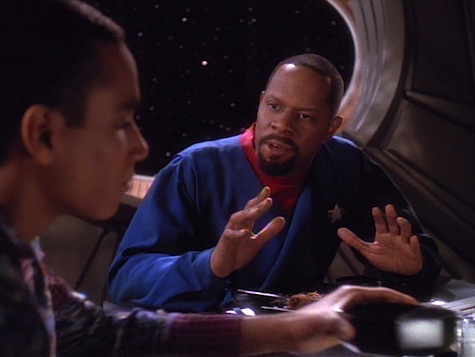 Hello Star Trek fans! Welcome to Season 3 Episode 22 of Deep Space Nine: Explorers. Sisko is on a mission to build a space ship out of wood and prove some ancient Bajoran legends may have actually been truths. And that jerk Dukat is here to try and convince him not to bother. But never fear, Sisko has a goatee and he will not be stopped.

In this episode, Sisko turns up with a goatee and we couldn’t be happier about it. He’s also got a new hobby – he’s found some plans for an ancient spaceship that Bajorans supposedly flew and he wants to build one! Not everyone thinks this is a great idea, but he does it anyway! And he sets out with Jake on a relatively perilous journey toward Cardassia. We’ve also got a B story of Julian and the woman who beat him out of the valedictorian title in school (how old are you when you stop worrying about being valedictorian? Come on Julian, give it up.). In the podcast we discuss all kinds of things including taking your kid on dangerous trips, Cardassians being jerks, wearing costumes to Comic-Con, and the concept of being homesick (James doesn’t get it).

Please listen to some of our favorite episodes like Duet, The Wire or Second Skin and check out the previous episode, The Die is Cast.

Join us for the next episode S3E23: Family Business.