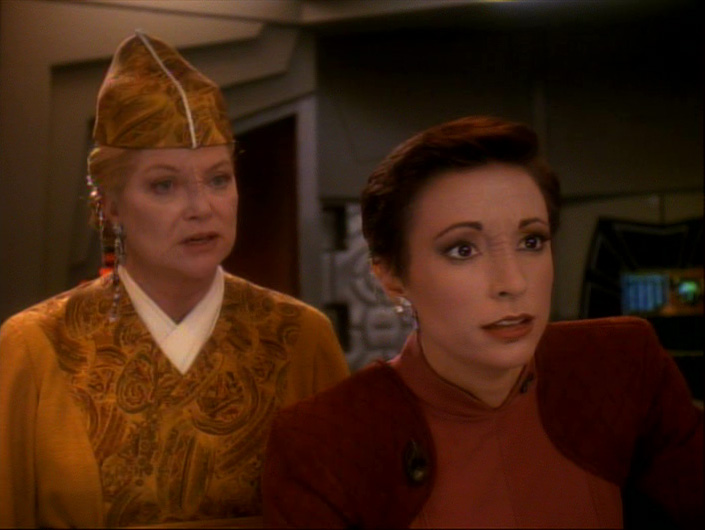 Hello Star Trek fans! Welcome to Season 3 Episode 13 of Deep Space Nine: Life Support. Hooray Louise Fletcher is back as Kai Winn to issue burns left and right and throw around her weight as Kai! (And by the way she is looking radiant in white.) But boo….things are not looking good for Kira’s boyfriend Vedek Bareil. He may be boring, but she loves him and we don’t want Kira to suffer!

Winn and Bareil are on their way to talks with the Cardassians in hopes of signing an historic peace treaty when their shuttle has a suspicious accident. Bareil is the only one seriously injured, putting the peace talks in jeopardy. Bashir does every thing he can to keep Bariel alive, including replacing parts of his brain (??? we can do that ???). Kai Winn’s desperation to complete the negotiations and fulfill her legacy as Kai are at odds with Julian’s desperation to save Bariel’s life.

Please listen to some of our favorite episodes like Duet and The Wire or check out the previous episode, Past Tense, Part II.

Join us for the next episode S3E14: Heart of Stone.