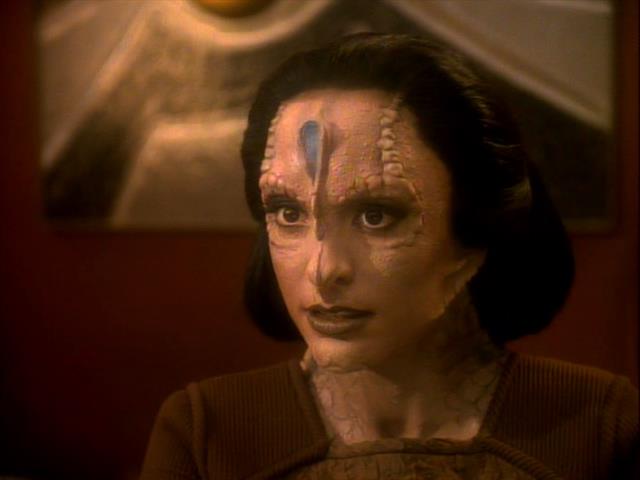 Hello Star Trek fans! Welcome to Season 3 Episode 5 of Deep Space Nine: Second Skin. In yet another example of Cardassians picking our trusty crew off the station and torturing them, Kira gets trolled by the nasty lizard-like aliens. They’ve kidnapped her and spend the entire episode convincing here that she’s actually been an undercover secret Cardassian spy all along. Come on! This is not nice! The only thing that could have made it worse is if Gul Dukat had shown up and drooled all over here strutting around like the dinosaur peacock that he is. Fortunately, we did not have to endure that horror show!

Good news…it’s another Major Kira episode! Bad news…she is not going to have a good time. The Obisidian Order is playing mind games with our favorite major as they alter her to look like a Cardassian and then basically torture her for the entire episode. But because it’s the Cardassians, all is not what it seems…maybe Major Kira isn’t the target after all! At least Kira does make a new Cardassian friend in this episode and we get a little phaser play from Garak, so not all is bad. Tune in for our deep analysis of another good season 3 episode!

Please listen to some of our favorite episodes like Duet and The Wire or check out the previous episode, Equilibrium.

Join us for the next episode S3E6: The Abandoned.