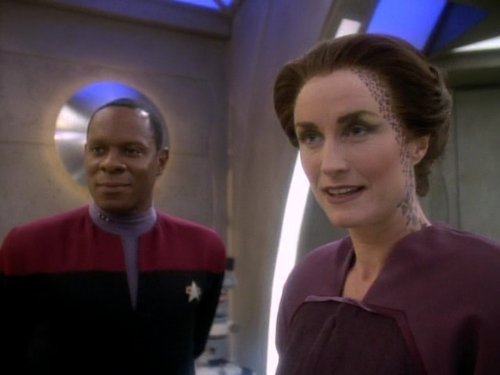 Hello Star Trek fans! Welcome to Season 3 Episode 4 of Deep Space Nine: Equilibrium. Yay, it’s a Dax episode! But yet again there is a whole part where she’s asleep and the episode is taking place around her…why is that a theme with Dax episodes? Anyway, join us to discuss the intricacies of Trill life and the tall cool drink of water that is Dr. Renhol (played by Lisa Banes). She is cool, confident and very smooth….but ohhhh, she’s hiding something! We also get some muscle flexing from Sisko as he plays fast and loose with a little thing called the Prime Directive. But really, is it a Star Trek episode if we’re not fast and loose with the Prime Directive?

Dax is a little cranky in this episode (taking over from Odo, obviously)! She accuses Sisko of cheating, she yells at everyone at dinner and she threatens to punch Kira…this is not good. But never fear, Dr. Bash-ear to the rescue! We jump in the Defiant and head to the Trill home world to figure out what’s going on with our normally very steady science officer. And once we’re there, we open a very big can of worms….almost literally!

Besides the big Trill secret we uncover, we also learn that Kim has finally found something relatable in Julian: a distaste for a particular root vegetable. Is it enough to turn this relationship around? Tune in and find out!

Please listen to some of our favorite episodes like Duet and The Wire or check out the previous episode, The House of Quark.

Join us for the next episode S3E5: Second Skin.