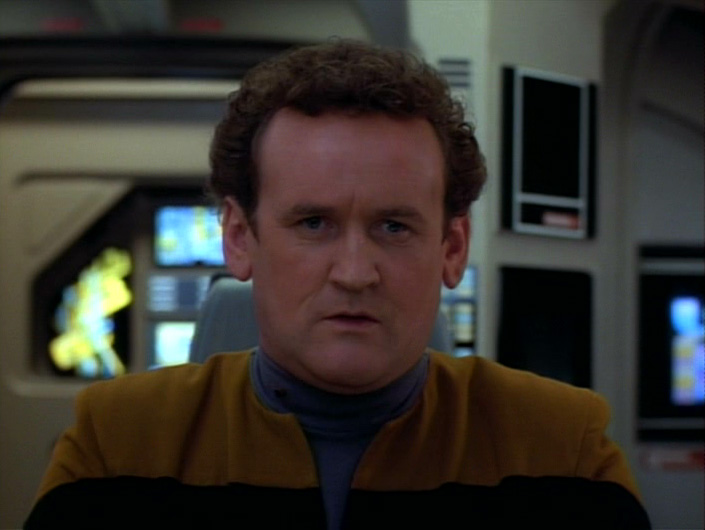 Hello Star Trek fans! Welcome to Season 2 episode 14: Whispers. In this episode Miles returns from an away mission to find that everyone is acting a bit squirrely. He can’t get a straight answer from anyone about what’s going on and even Molly is behaving strangely. Since Odo is away, he starts listening around corners and doing his own investigating!

This is a flashback episode which starts with Miles recording a personal log in a runabout as he escapes DS9. Then he flashes back to everyone acting strangely, especially his wife and daughter! But he’s also getting funny reactions from Sisko, Kira and some new Starfleet NPC. Additionally there is a lot of whispering going on around him and no one seems to give him a straight answer. So Miles sets out to figure out what happened on the station while he was away.

Miles keeps it together for quite while, but when both Odo (who newly arrives at the station halfway through the episode) and Jake begin to react to him differently, he panics. Has it gotten everyone? Is this a major plot that has infected all of Starfleet? Well it’s nothing that a lot of double-sweet coffee and a sneaky escape can’t fix.

Please listen to season 1 and some of our favorite episodes like Duet and Progress. Or you can also listen to the previous episode in the series: Armageddon Game.

We dive into Season 2 Episode 15 of DS9: Paradise.