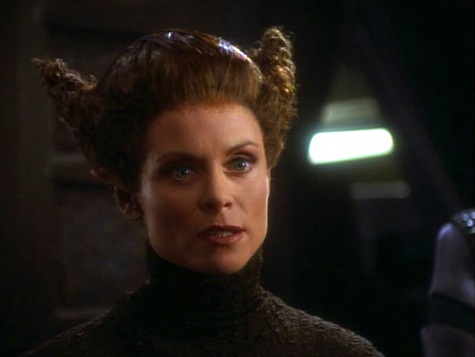 Hello Star Trek fans! Welcome to Season 2 episode 13: Armageddon Game. In this episode we have some Julian/Miles angst, a deadly bio-weapon and some shockingly crazy hair. No seriously, LOOK AT THE HAIR.

Julian and Miles are on a mission to help the T’Lani and the Kelleruns destroy their stockpile of deadly biomechanical gene disruptor weapons (called Harvestors). Something goes very wrong just as they destroy the last of the weapons when armed thugs break into the lab and kill everyone (except our heroes, of course). Back on DS9, everyone believes Miles and Julian are dead except for one person who finds it hard to believe that Miles was drinking coffee in the afternoon. And that’s all it takes for Sisko and Dax to start an investigation of their own. Meanwhile, Julian is just trying to keep Miles alive long enough to make it home.

Please listen to season 1 and some of our favorite episodes like Duet and Progress. Or you can also listen to the previous episode in the series: The Alternate.

We dive into Season 2 Episode 14 of DS9: Whispers.