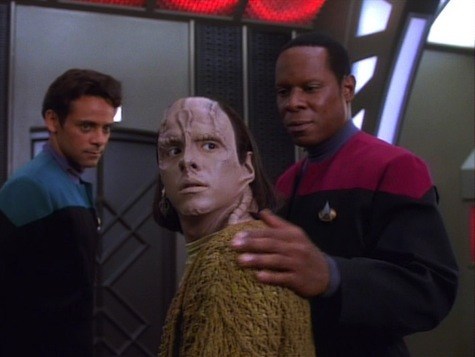 Hello Star Trek fans! Welcome to Season 2 episode 5: Cardassians! This episode focuses on war orphans left behind by the Cardassians when they withdrew from Bajor. Sisko finds himself in the middle of a custody battle that seems to have piqued the interest of Gul Dukat. Dukat seems overly concerned about the plight of a single orphan that he (supposedly) didn’t even know existed up until now. Lots of drama and also another recognizable guest star in Robert Mandan.

An orphaned Cardassian “child” (and I use that term loosely as the actor was in his mid 20s, but playing a 13 year old) turns up at the station. Garek takes a particular interest in him and pays the price when the kid bites him. This sets off a string of events that involves several Dukat phone calls, Sisko in his PJs, some fun banter between Bashir and Garak, a quick trip to a Bajoran orphanage and a weighty custody hearing. Join us as we discuss the development of the Garak-Bashir relationship, the sliminess of Dukat and the purpleness of Sisko’s PJs.

Please listen to season 1 and some of our favorite episodes like In the Hands of the Prophets and Duet. Or you can also listen to our previous episode (a really good one): The Siege.

We dive into Season 2 Episode 6 of DS9: Melora.