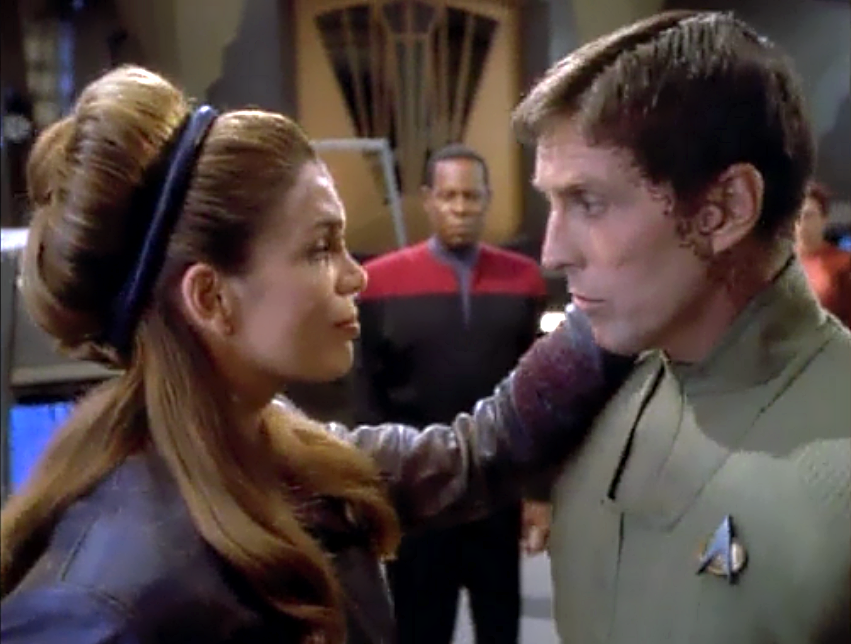 Hello everyone! Welcome to Season 2 episode 4: Invasive Procedures! Hot off the 3-part season opener, we slide into a standalone episode starring none other than Lionel Luthor…well actually it’s John Glover who is well known for playing Lionel Luthor on Smallville and most importantly LA slimeball Brice Cummings in Scrooged (his most important role). Because the station has been evacuated (so we ARE capable of evacuating!!) , DS9 is being run by a skeleton crew leaving it vulnerable to an attack. And Lionel attacks! And as always, the crew is unprepared and cannot come up with a useful plan! Argh!!!

Lionel Luthor (also known as Verad in this episode) has come to kidnap a member of the crew…well part of a member of the crew. He wants Dax, not Jadzia, just Dax. He’s a trill without a symbiont and he’s come to rectify that. And let’s just say…this does not go well for anyone.

The usual and not so usual

We cover the usual (bad hair) and the not so usual (Kira getting beat up by someone). Something has gone wrong with the hair in season 2 except for some killer bangs back in episode 2. But we are all a bit frizzy or in Lionel Luther’s case we’ve had a very unflattering bowl cut. Questionable hair is a common thing on this show, what’s not common is someone getting the better of Kira in a fight! She takes out a big Cardassian in episode 1 of this season, but here she gets taken out by Verad’s tough as nails girlfriend. It is alarming!

Please listen to season 1 and some of our favorite episodes like In the Hands of the Prophets and Duet. Or you can also listen to our previous episode (a really good one): The Siege.

We dive into Season 2 Episode 5 of DS9: Cardassians.