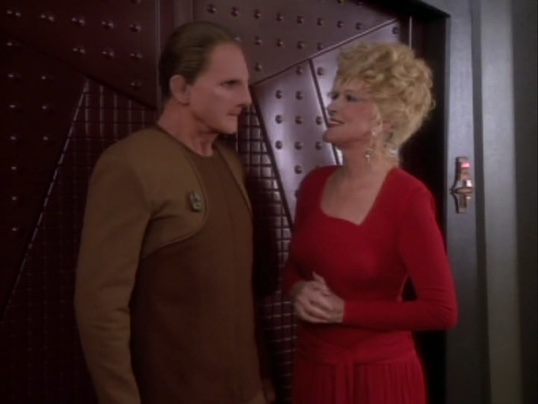 Welcome to S1E16 The Forsaken. In this episode of DS9, we get a visit from Lwaxana Troi, a well-known and loved Star Trek The Next Generation character. She is up to her usual antics here, chasing after one of our crew members. In a related story, the station is yet again put at risk by some very bad plans, including just downloading files from a rogue probe-like vessel that comes through the wormhole.

There are a number of inter-related stories going on in this episode. Odo is trapped in a turbolift while fighting off some unwelcome advances. Bashir is trying to keep a bunch of stuffy ambassadors happy. And Miles and Dax are dealing with some dangerous files they’ve haphazardly downloaded to the station. They somehow equate these files to an abandoned puppy (The Forsaken) and are trying to build a dog house for it. Yes, that’s what i said…THEY ARE TRYING TO BUILD A DOGHOUSE FOR THE COMPUTER FILES.

This is primarily an Odo/Lwaxana episode even though the two don’t have a lot of screen time. Somehow these two great actors lift this entire episode and we do forgive the puppy computer analogies (for the most part) because of them.

Listen to our intro episode if you want to know a little more about us. And kick off the whole thing with our rebinge of the pilot episode Emissary. Or catch up on the previous episode: S1E15 If Wishes Were Horses (the wackiest of all season 1 episodes).

We dig into Season 1 Episode 17 of DS9: Dramatis Personae.