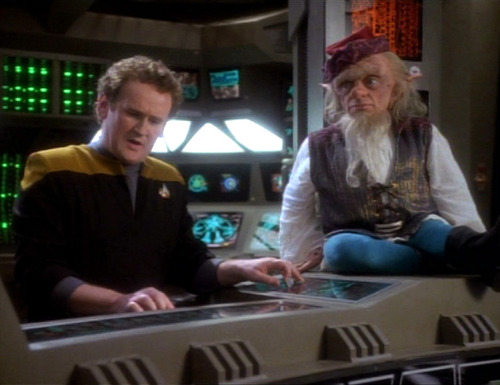 Welcome to S1E15 If Wishes Were Horses. This is a peculiar episode where imaginations are running wild and also coming to life. Miles has to put up with Rumpelstiltskin (yep, you read that right) and Julian has to put up with a clingy Jadzia (you kind of asked for it, Julian).

If Wishes Were Horses

While Odo is dealing with a blizzard and emus running wild on the Promenade, the rest of the crew is dealing with imaginary characters seemingly taking physical form. Julian gets an important lesson in being humiliated at work by someone not letting him just do his job (hello karma) and Miles is being shadowed by a scary dude from a story he read to his daughter Molly. Oh yeah and for the 100th time (approximately) this season, the station is nearly completely destroyed and we still don’t have an evacuation plan in place. Let’s do some drills people! This is one wacky episode.

No B-story this week. Jake makes a couple of appearances, but he and Nog aren’t up to their usual antics. Instead we get an imaginary baseball player and two Jadzias (which weirdly is not better than just having one).

Listen to our intro episode if you want to know a little more about us. And kick off the whole thing with our rebinge of the pilot episode Emissary. Or catch up on the previous episode: S1E14 Progress (we are pretty proud of that one).