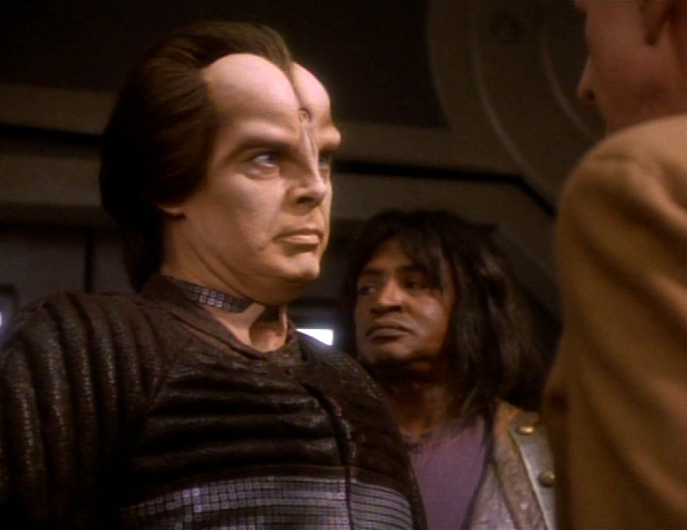 Welcome to our Rebinge of Star Trek DS9: Vortex

Episode 11 of season 1 is entitled Vortex. Quark is up to no good (is he ever not??) when one of his scams leads to the death of a Miradorn twin. And the Miradorns are not exactly friendly folk. Uh oh…

Quark strikes an underhanded deal with a shady character named Croden from the Gamma Quadrant. When that deal goes south, half of a twinned Miradorn pair ends up dead on the floor and the other half has sworn revenge. While Sisko tries to figure out how to get Croden back to his home planet, Croden hatches a scheme of his own. He starts talking to Odo about a settlement of changelings like Odo in a nearby vortex. Odo doubts the story, but Croden has a souvenir from the vortex that gives some credence to his story.

This episode has some shape shifting, some difference shaming, some bad costumes, some bad plot holes and some truly unforgivable wigs. But in the end, we get some important Odo character development. Is Kim warming up to this show!?

Listen to our intro episode if you want to know a little more about us. And kick off the whole thing with our rebinge of the pilot episode Emissary. Or catch up on the previous episode: S1E10 The Nagus.