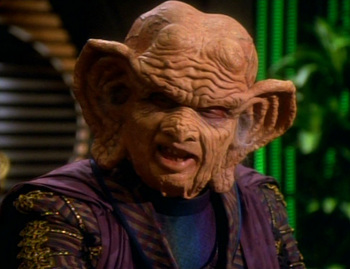 Welcome to our Rebinge of Star Trek DS9: The Nagus

It’s episode 10 and time for The Nagus! Haven’t had enough Ferengi? Well, you’ve come to the right place as a whole swarm of them arrive at Deep Space Nine. Swarm? Gaggle? Herd? Murder? At any rate, a bunch of them turn up and Dax wonders if they’re here for Quark’s birthday! Nope…they’re here to see The Nagus.

The Nagus is a very old Ferengi played by Wallace Shawn of Princess Bride fame. While it’s tough to see him under all that Ferengi makeup, as soon as he speaks, it all becomes clear. What’s the first thing the Nagus does when he arrives? He drops dead! What is Quark to do now? Well…take over for him, that’s what! At the same time that this is going on, Jake, the sweetest kid on the planet, is having some ups and downs with his best friend Nog. What is up with these two? Why are they having secret meetings after midnight? Tune in and find out!

Listen to our intro episode if you want to know a little more about us. And kick off the whole thing with our rebinge of the pilot episode Emissary. Or catch up on the previous episode of S1E9: Move Along Home.