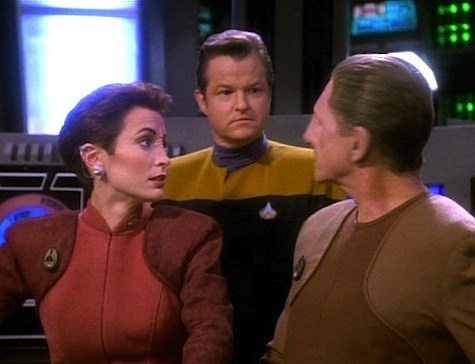 Welcome to our Rebinge of Star Trek DS9: The Passenger

In the 8th episode of season 1, Bashir and Kira rescue a Kobliad security officer from a burning ship. They bring her back to DS9, but unknowingly also bring back another invisible passenger named Vantika! Either he’s a ghost or he’s stowed away inside of somebody’s brain…who could it be?

Who is The Passenger

Well, we know the passenger is Vantika, but we don’t know how he made his way to DS9. Our trusty crew isn’t even sure it’s really him because his body is in the morgue! But Ty Kajada, the Kobliad security officer who has been chasing Vantika for 20 years knows it’s him. And her willingness to prove her point lands her in a medically induced coma.

Julian’s massive ego is on display from the start as he tells Kira how impressive he is. She wants to bring him down a peg or two, but ultimately Sisko gets to shoot him, so maybe that will help. We also meet a new security officer from Starfleet named Frowny-Face Primmin. There’s discussions of Julian’s ego, a golden brain, Odo’s fragile psyche, leadership and some highly questionable over-acting.

Listen to our intro episode if you want to know a little more about us. And kick off the whole thing with our rebinge of the pilot episode Emissary. Or catch up on the previous episode of S1E7: Dax.

We dig into Season 1 Episode 9 of DS9: Move Along Home.