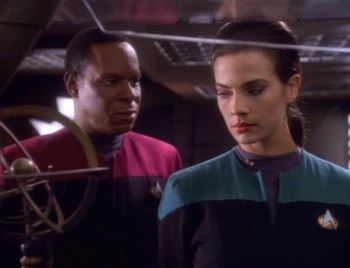 Welcome to our Rebinge of Star Trek DS9: Dax

DS9’s seventh episode, entitled Dax, gives us a little insight into Trill life. Something from Curzon Dax’s past comes back to haunt Jadzia when someone arrives at the station to hold her accountable for some major crimes. The visitor arrests Jadzia and tries to steal her away quietly, but our trusty crew catches them in the act and Jadzia must endure a formal Bajoran hearing to determine if she’ll have to stand trial for Curzon’s past.

When Ilon Tandro (also known as Phoebe’s father-in-law) turns up with an extradition order, Jadzia suddenly clams up. This dude is throwing around claims of murder and wants Jadzia to pay for the crimes committed by Curzon Dax against Ilon’s father. Sisko knows none of it is true. Odo is pretty sure it’s all true. And Jadzia isn’t saying anything. Odo heads off to Klaestron to do a little investigating and he finds the dead guy’s widow…played by none other than the amazing Fionnula Flanagan!

Listen in to hear us discuss some more creeping by Julian, living with lifetimes of regret, talking through a curio cabinet, Data’s mom and oh yeah, singing poo. (Not a typo.)

Listen to our intro episode if you want to know a little more about us. And kick off the whole thing with our rebinge of the pilot episode Emissary. Or catch up on the previous episode of S1E6: Q-Less.

We dig into Season 1 Episode 8 of DS9: The Passenger.