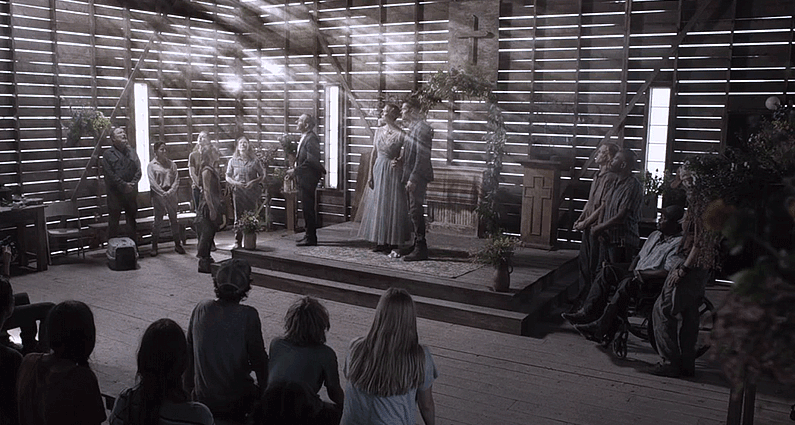 Talking Through End of the Line

This episode began with feedback on S5E15 Channel 5 from Todd and Aaron. Discussion about the season finale, in particular, begins at 13 minutes 27 seconds into the podcast.

We got a wedding!

There were some good points to celebrate in this season finale. We finally have our power couple, John Dorie and June, tie the knot this episode, in a very bittersweet scene at Humbug’s Gulch. Dwight was great this episode, and the walker roundup and ride down the rapids were pretty great to watch, but we had a lot of problems with this episode.

Is it the end of the line for Morgan?

With an ending that was similar to the final scenes of Madison in the Season 4 mid-season finale, but with a much different story told on Talking Dead. That time, they were very clear on Talking Dead that Madison was dead. Since I watched it a couple of nights early because I have AMC Premiere, I had to wonder if he was going to be dead, but it turned out that they didn’t say either way. Clearly, whether he makes it through Season 6 or not, there will be some to tell. Could the long thought dead Madison save him? Could it be that Dwight did not hallucinate Sherry, that she’s really alive and tried to make contact, and that she’s the one who will save him next season? Is there a dumpster for Morgan to crawl under? 🙂

Is Ginny as glad as a grandma with a gravy boat?

Virginia, the person not the state, has a thing with alliteration that I’m making fun of here and with my rating. That wasn’t the only Ginny thing that bothered me; I really had a problem with Ginny’s strategy of splitting apart the group, even as far as at the family level. If she’s really an efficiency expert, you would think she would realize that the best way for our people to be productive members of her society is for them to be content. There’s no way they will be content and productive if families have been split apart, whether they are families in the traditional sense, or in the chosen sense. She’s mean enough to keep Skidmark and Daniel apart? What good would that do?

Please leave your feedback! We got a good dose of feedback again this week, so keep it comin’! Next time, we’ll cover any additional feedback we get for S5E16 End of the Line, and then talk through a more detailed analysis of the season 10 premiere of The Walking Dead, titled Lines We Cross. Get your feedback in by 6 PM Eastern/5 PM Central on Tuesday, October 8, 2019. One of the best ways to submit feedback is on our Facebook group. You can also send us an email at our new email: walkingdead@talkthroughmedia.com or call our new voicemail at 216-232-6146.

Our next episode will be something new!

Now, that said, your feedback will NOT be a part of the next episode, but we have something special planned. AMC Premiere made The Walking Dead season premiere available a week ahead of its airing on AMC this Sunday night. Because of that, we were all able to watch the season premiere several days early! What does that mean for you? Well, you’ll get an extra episode! We’re going to do something we’ve never done, a “first impressions” podcast of the season premiere! That will be TWDTT 99, and we intend on releasing that episode on Sunday night, right after Talking Dead, or soon after! Episode 100 will be the full TWDTT episode that will cover your feedback and a more detailed analysis from us.

We could still use your help!

This season, collecting the feedback has been challenging, and we could use your help. Our availability is limited for each of us on Tuesdays when the bulk of the feedback comes in. We have to grab it from the various sources, including the Facebook group, the feedback form, email, and voice mail; put it into a Google doc; separate it into the appropriate sections of the podcast: Ratings, sauces, and feedback; and then fix things like spelling mistakes, grammar, and format, and then divide it by who will read it. If you are available most Tuesdays that we have an episode to record and want to help the podcast out, please drop us a line, either using the feedback form, the Facebook group, or if you are friends with us on Facebook, over Messenger. We’ll work out something if you can, like comping you into the Patreon, assuming you can do that.

Don’t forget that we have our new Patreon at https://www.patreon.com/WalkingDeadTalkThrough! Help get me to WSC Atlanta! I have a press pass but need some help with the costs of getting and staying there. Mark will be attending, but you can help get me there, too! Please remember to subscribe to us on Apple Podcasts or whatever is your podcast client of choice. Subscribing to us helps us move up in the rankings, so it’ll help us out tremendously! You’ll also get new episodes when they’re released. And while you’re in there, leave us a rating or review! It only takes a few minutes and it also helps us out! And join our Facebook group!