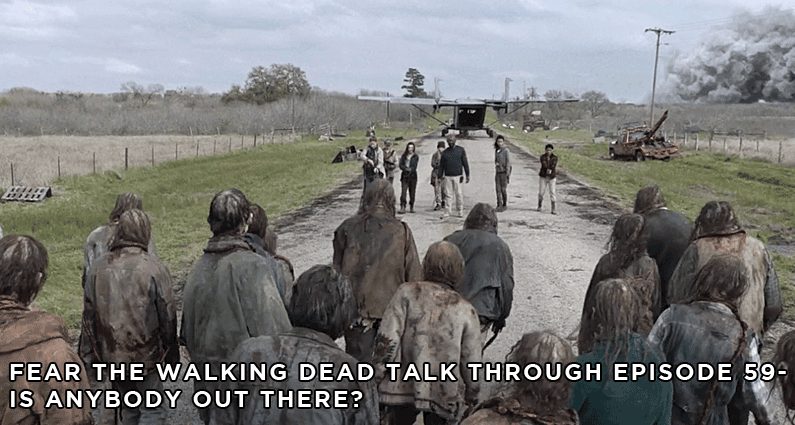 Fear the Walking Dead Talk Through
FTWDTT 059 - Is Anybody Out There? (S5E8)

Talking Through Is Anybody Out There?

Kyle, Mark and I talk through Fear the Walking Dead Season 5 Episode 8, which is titled, Is Anybody Out There? This was written by co-executive producer Michael Alaimo, and directed by Michael E. Satrazemis.

We have a very important announcement!

After five years, we decided that we were ready to strike out on our own, and as a result, we are leaving the Golden Spiral Media network. We would like to thank Darrell for the opportunity to podcast with GSM over the last five years, and thank him for allowing us to take our podcasts with us. Going forward, the podcasts that we do will be a part of our new network, which is called Talk Through Media, and will consist of the following podcasts:

We are excited to start our new endeavor, and we hope to have everything set up by the time we return in three weeks for the FTWD mid-season premiere! If you are listening to us via our TWDTT/FTWDTT feed on whatever podcast app you choose, you should be OK going forward. When we make the change, it should be transparent, and the feed should continue to work. However, if you don’t see an episode from us in about three weeks, several days after the mid-season premiere, then there might be an issue. If you listen to us via the goldenspiralmedia.com website, the episodes will no longer appear here. Just go to walkingdeadtalkthrough.com and you will be redirected to the new location from there!

We have more feedback for last week’s episode… S5E8 coverage starts at 34:22…

It seems that most people agree that this episode was better than the last several episodes, although Kyle didn’t like it as much as Mark or I did.

That’s it for Is Anybody Out There?

So Is Anybody Out There? We think so! We’ll be busy over the next three weeks getting our podcasts set up at their new home. We’ll post a link to them here once we have everything finalized. Please leave your feedback for the mid-season premiere for Fear the Walking Dead, Season 5 Episode 9, which is titled, Channel 4, by 6 PM Eastern/5 PM Central on Tuesday, August 13, 2019. Check the Facebook group for any deadline changes. The best way to submit your feedback is on the Facebook group, via our current email address, walkingdeadgsm@gmail.com or through our new feedback form.

Other Fun Stuff Completely Unrelated to Is Anybody Out There?

Sign up to our Facebook group to make it easier to contribute feedback and interact with us and other listeners! If you want to help us out with the editing of this podcast, please donate credits to Kyle’s Auphonic account. He uses Auphonic to make these episodes sound so good! That link is https://auphonic.com/donate_credits?user=kt1ao. Please remember to subscribe to us on Apple Podcasts. Subscribing to us helps us move up in the rankings, so it’ll help us out tremendously! You’ll get new episodes when they are released. And while you’re in there, leave us a rating or review! It only takes a few minutes and it helps others to find us!