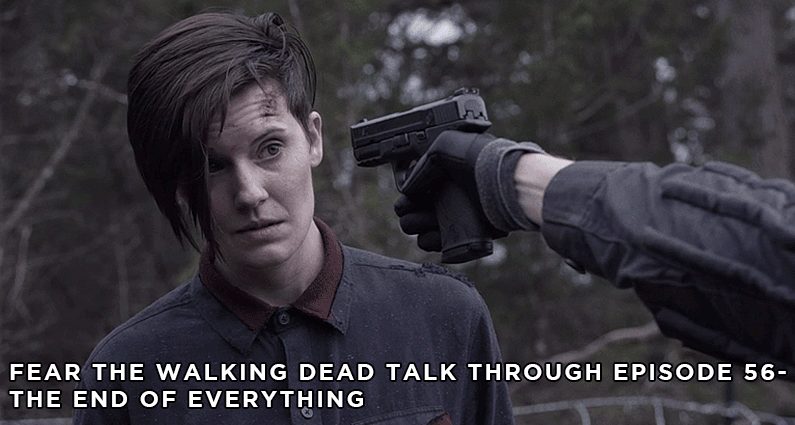 Talking Through The End of Everything

We have more feedback for last week’s episode… S5E5 coverage starts at 13:35…

Althea’s Backstory and The Bog

We get to learn a bit about why Althea’s so determined to get the story and at least a part of the story that was The Bog. She chased the story instead of staying with her brother. We get some insights about the group with the helicopter that we also see that takes away Rick on The Walking Dead. If they are trying to rebuild civilization, why are they killing anyone they come in contact with? For that matter, to take it down to basic survival, since a civilization needs people, not to mention more people being born, why would you kill someone who can have children? Why not recruit her? I don’t get it. This episode just made me ask a lot more questions about them than it answered.

Yes, it was obvious that there was an attraction between Althea and Isabelle, but the whole “I’m going to kill you but I can’t ’cause I love you” vibe I just couldn’t get into. If the actors weren’t as strong this episode, I would not have given a much lower rating to this episode, but I liked the ending and in the end, I liked it more than I could have. Kyle and Mark liked it more than I did.

FTWD Ratings are up slightly…

That’s it for The End of Everything!

The End of Everything didn’t wow us. We liked it, but no one loved it. We have to record a day early next week, so please leave your feedback for Fear the Walking Dead, Season 5 Episode 6, which is titled The Little Prince, by 6 PM Eastern/5 PM Central on Monday, July 8, 2019. Check the Facebook group for any deadline changes. The best way to submit your feedback is on the Facebook group.

Other Fun Stuff Completely Unrelated to The End of Everything!

Sign up to our Facebook group to make it easier to contribute feedback and interact with us and other listeners! If you want to help pay for the editing of this and other podcasts, I mentioned a while back that you can donate credits to my Auphonic account, which I use to make these episodes sound so good! That link is https://auphonic.com/donate_credits?user=kt1ao. Please remember to subscribe to us in Apple Podcasts. Subscribing to us helps us move up in the rankings, so it’ll help us out tremendously! You’ll also get new episodes when they’re released. And while you’re in there, leave us a rating or review! It only takes a few minutes and it helps others to find us! Have you checked out Amazon lately? That’s one way you can support this network and help keep the lights on!