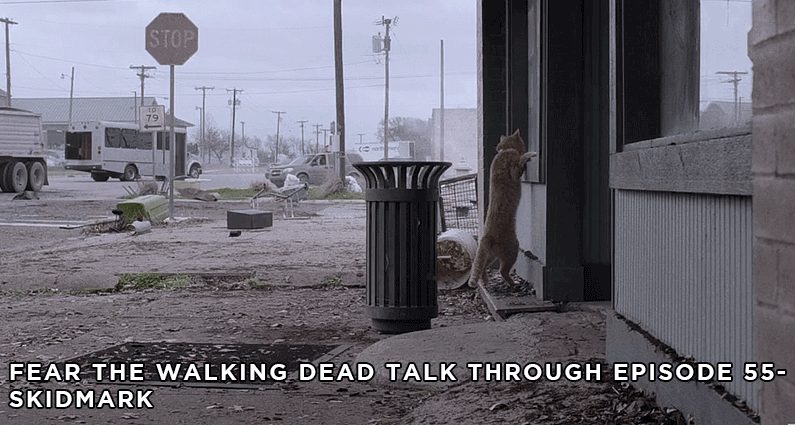 We have more feedback for last week’s episode… S5E3 coverage starts at 20:57…

A cat that listens to you!

We get a good cold open this episode, with Daniel showing how he uses Skidmark as a diversionary tactic. That little guy seems to know how to get the zombies’ attention and smart enough to know not to let them get too close. I thought this was a great use of the cat, though some would say most cats don’t take commands. However, they do exist. One of my cats, Tazz, reminds me of Skidmark. He listens to commands and usually follows them. We also see Daniel be The Pied Piper of walkers again, something he did in S1E6 The Good Man.

More of those kids!!! Quick, get to the choppa!

We see that there are more than just Dylan, Max, and Annie that are around. There are more kids, lots more. What happened that made them so scared of grown-ups? Then, we see that symbol we saw when Althea was taken, and We see the helicopter again, and it’s pretty clear this is from the same group… you know, the A or B group… that took away Rick and Jadis in the helicopter on TWD. It seems we’ll get to know more about this group next episode.

No, get to the plane, I mean walker chopper!

This episode had a unique way to take care of walkers… the plane propellers. That was a pretty cool stunt, helping to save Daniel and at least a truce be called between Daniel and Strand. I thought the scenes with Daniel and Charlie were nice, too. Could he become a foster father for her?

FTWD Ratings are down to a new low…

That’s it for Skidmark!

Skidmark didn’t wow us. We liked it, but no one loved it. Please leave your feedback for Fear the Walking Dead, Season 5 Episode 5, which is titled The End of Everything, by 6 PM Eastern/5 PM Central on Tuesday, July 2, 2019. Check the Facebook group for any deadline changes. The best way to submit your feedback is on the Facebook group.

Sign up to our Facebook group to make it easier to contribute feedback and interact with us and other listeners! If you want to help pay for the editing of this and other podcasts, I mentioned a while back that you can donate credits to Kyle’s Auphonic account, which I use to make these episodes sound so good! That link is https://auphonic.com/donate_credits?user=kt1ao. Please remember to subscribe to us on Apple Podcasts. Subscribing to us helps us move up in the rankings, so it’ll help us out tremendously! You’ll also get new episodes when they’re released. And while you’re in there, leave us a rating or review! It only takes a few minutes and it helps others to find us!