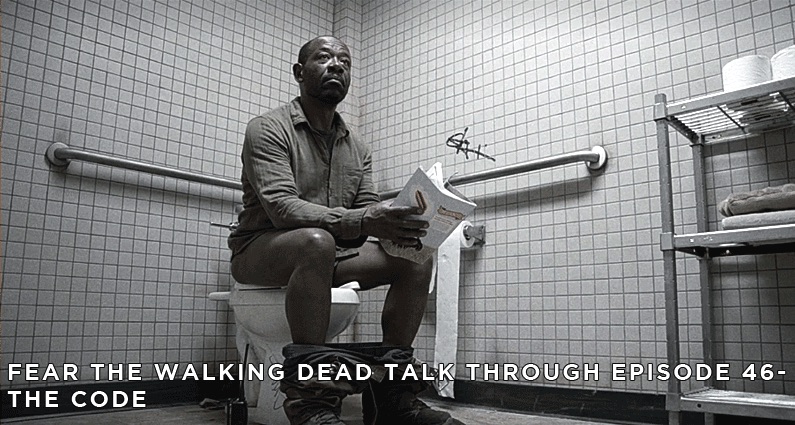 Talking Through The Code!!!

On this episode of Fear the Walking Dead Talk Through, we discuss Fear the Walking Dead Season 4 Episode 11, which is titled The Code. It was written by co-showrunner and executive producer Andrew Chambliss & staff writer Alex Delyle and directed by Tara Nicole Weyr. This was a well-acted episode, with interesting new characters, but beyond that, the episode falls apart. For me, the plot of this episode was one of the weakest of the series, and maybe the entire franchise. How does Morgan not wake up even once while the truck he is sleeping in is being driven from Texas to Mississippi??? Trust me, I recently drove a truck 1200 miles across several states, and there is no way Morgan could have slept through it without being drugged. What were these characters doing BEFORE they met Morgan? Were Sarah and Wendell driving a different truck? If they weren’t transporting these boxes, how did they know all the routes? What about Jim? How was Jim going to become “rich” in the apocalypse if he never left the brewery? It goes on and on from there. Listen to the episode for more.

Ratings were down slightly…

That’s it for The Code!

Please leave your feedback for Fear the Walking Dead, Season 4 Episode 12, titled Weak, by 6 PM Eastern/5 PM Central on Tuesday, September 4, 2018. The best way to submit feedback is on our Facebook group.

Other Fun Stuff Completely Unrelated to The Code!

I also took a few minutes to give an AMC Premiere update. It does not let you watch past seasons of shows, which really sucks. I continue to have authentication issues. Although I had downloaded a copy of this week’s episode on my phone through the app, which I was planning to watch on my lunch break, the app wouldn’t let me watch the episode because it wasn’t authenticating. I don’t know if the problem lies with Spectrum or AMC, but it led to a bad user experience.

If you want to help pay for the editing of this and other podcasts, I mentioned a while back that you can donate credits to my Auphonic account, which I use to make these episodes sound so good! That link is https://auphonic.com/donate_credits?user=bmeloche.

Please remember to subscribe to us on Apple Podcasts. Subscribing to us helps us move up in the rankings, so it’ll help us out tremendously! You’ll also get new episodes when they’re released. And while you’re in there, leave us a rating or review! It only takes a few minutes and it helps others to find us!