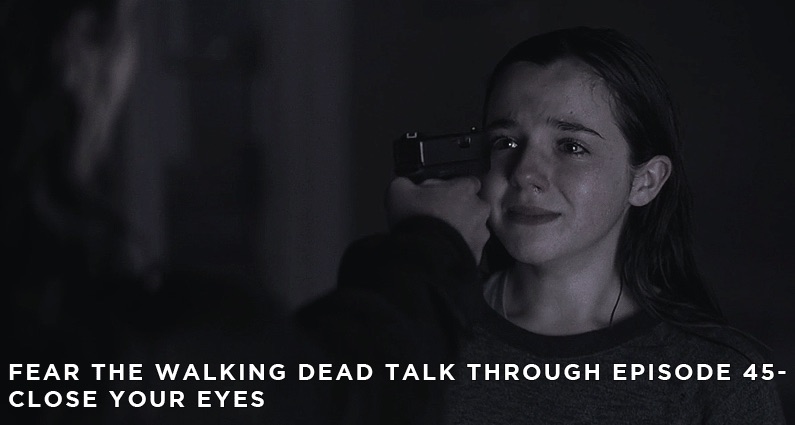 Talking Through Close Your Eyes

On this episode of Fear the Walking Dead Talk Through, we discuss Fear the Walking Dead Season 4 Episode 10, which is titled Close Your Eyes. It was written by co-executive producer Shintaro Shimosawa and directed by co-executive producer Michael E. Satrazemis. This was a bottle episode, but a good one. It only featured two characters: Alicia and Charlie. Charlie became somewhat less annoying this episode, and Alycia Debnam-Carey got to shine with this episode. Compared to last week, this was definitely a better episode, but, for me, it wasn’t outstanding. Though the acting was spot on, some of the dialog and scenes were a bit too on the nose. While the hurricane was definitely more believable this time around, there was one plot twist that I found a bit of a stretch.

That’s it for Close Your Eyes!

Please leave your feedback for Fear the Walking Dead, Season 4 Episode 11, titled The Code, by 6 PM Eastern/5 PM Central on Tuesday, August 28, 2018. One of the best ways to submit feedback is on our Facebook group.

Other Fun Stuff Completely Unrelated to Close Your Eyes!

I also took a few minutes at the end of our episode discussion to talk about my recent experiences with AMC Premiere. When it works, it’s not bad. You get to watch shows commercial-free, there is additional content available to Premiere subscribers, and I enjoyed my first week. I was able to sign up using a $5 credit I had from Google Play, so it’s like having a free month. However, there were a few issues that make me fall short of recommending it right now. Listen to the episode for more.

If you want to help pay for the editing of this and other podcasts, I mentioned how you can donate credits to Brian’s Auphonic account, which he uses to make these episodes sound so good! That link is https://auphonic.com/donate_credits?user=bmeloche. Please remember to subscribe to us in Apple Podcasts. Subscribing to us helps us move up in the rankings, so it’ll help us out tremendously! You’ll also get new episodes when they’re released. And while you’re in there, leave us a rating or review! It only takes a few minutes and it also helps us out! Thanks to Cajuncartoon for their 5-star Apple Podcasts review!