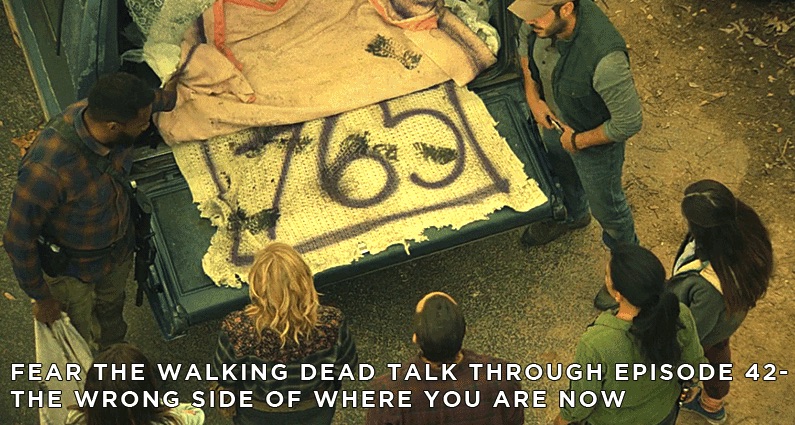 Talking Through The Wrong Side of Where You Are Now!!!

Hey Survivors! Brian was busy preparing to move to Florida on the night we recorded, so he wasn’t able to join us for this episode. So for this episode Mark and I take the reigns. We take your feedback, mixed in some of ours, and with a little helping of black sludge, we strike a match and set the discussion ablaze. Still so many unanswered questions with this episode (Madison) but we have the Mid-Season finale next and they better not Gimple us with a flaming dumpster. Join us as we discuss Fear the Walking Dead Season 4  Episode 7, The Wrong Side of Where You Are Now.

Don’t Forget the Mid-Season deadline is…

Please leave your feedback by 6 PM Eastern/5 PM Central on Tuesday, June 12, 2018. We will be discussing Fear the Walking Dead Season 4 Episode 8, titled No One’s Gone. One of the best ways to submit feedback is on our Facebook group.

Other Fun Stuff Completely Unrelated to The Wrong Side of Where You Are Now!

If you want to help pay for the editing of this and other podcasts, I mentioned how you can donate credits to my Auphonic account, which I use to make these episodes sound so good! That link is https://auphonic.com/donate_credits?user=bmeloche. Please remember to subscribe to us on Apple Podcasts. Subscribing to us helps us move up in the rankings, so it’ll help us out tremendously! You’ll also get new episodes when they’re released. And while you’re in there, leave us a rating or review! It only takes a few minutes and it also helps us out!