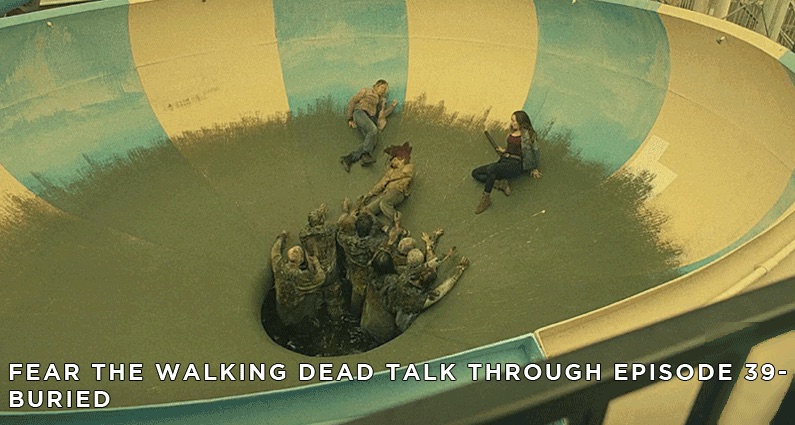 Hope from before brings sadness now…

If anything was buried with the weapons at the end of the episode, it was hope. This episode oozed sadness from every pore. The surprise death of Nick in last week’s episode played heavy on the passengers of the MREP (Althea’s SWAT vehicle), as the old remaining crew of Alicia, Strand and Luciana recount the stories of how, on one day, they all decided to stay at the Diamond and dig in for the long haul instead of leaving.

Apparently, they believe those decisions to stay cost Nick his life, although I would counter that argument, saying that they could have left and Nick could have died anyway, possibly even the same way. Plus, if they had left, how do they know that they would have ended up any better? I want to know how staying backfired so badly, but I suspect that we may not know that for a few weeks longer. We see Strand may be trying to be the better man, but Strand shows that, deep down, he’s always looking out for himself. Luciana blames herself for turning to the wrong page in that atlas that changed their thinking and they try to replant instead. Alicia thinks about convincing her mom to leave at Naomi’s advice but convinces Naomi to stay and build an infirmary instead.

Speaking of Naomi, I predicted it, and I was right! Naomi IS Laura. Naomi had the matching six-shooter that John was looking for. Now, is her real name Naomi, Laura, or, like I say during the episode, some other 5-letter woman’s name? Who knows? We think we are going to learn that story next episode.

Kyle and Mark think that John has a dark side, and may even be a bad guy. I think they are misjudging John, at least in part by past characters that Garret Dillahunt has played over the years. John’s a good man, and I believe we will see that play out. I don’t want to see him do a heel turn. We don’t need him to be a bad guy. We talked about John being simple, but that doesn’t mean he’s dumb. That only means that John has a way to get down to what really matters and doesn’t overcomplicate things. We’ll see who’s right going forward. By contrast, Naomi/Laura is a character that seems deeply troubled. Like Glynis said in her feedback, she appears to be one of those people who bolts at the first sign of trouble. I think we’ll find out that she’s still alive, though I really want to know why they think she’s dead. She may be dead, but like with Madison, I doubt it. But where is she, and what happened at the Diamond? Only time will tell.

Buried was another good episode, though maybe not as good as the last one or the season premiere. Feedback on this episode is positive, although not overwhelmingly so.

Please leave your feedback by 6 PM Eastern/5 PM Central on Tuesday, May 15, 2018. We will be discussing Fear the Walking Dead Season 4 Episode 5, titled Laura. This may be a mostly John/Laura centered episode, but I do hope we will get some clues to whether she really is dead (which seems like a waste) and about Madison’s fate. One of the best ways of sending in your feedback is through our Facebook group!

I announced several weeks ago that I have a serious personal/family issue that’s happened to me, the details of which I will not publish on this blog, Facebook, or Twitter. I’ve re-purposed last year’s request to help me pay for a new hard drive on GoFundMe, to help pay for other needs, and there’s a new dollar amount. I got an additional contributor this week, so thank you to all who have contributed so far! We have the best listeners in all of podcasting! Please remember to subscribe to us on Apple Podcasts. Subscribing to us helps us move up in the rankings, so it’ll help us out tremendously! You’ll also get new episodes when they’re released. And while you’re in there, leave us a rating or review! It only takes a few minutes and it also helps us out!