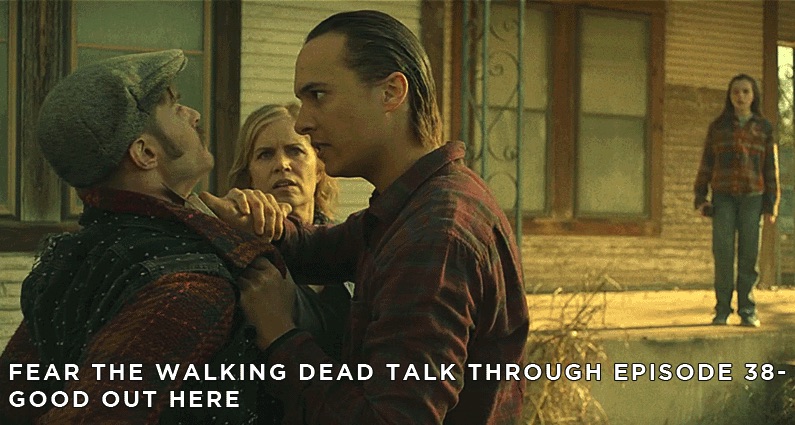 Talking Through Good Out Here!!!

Do not read any further if you have not watched this episode! I mean it! OK… here it goes… We lost Nick this week!!! NICK!!! NICK??? It was a shocking ending that you couldn’t have seen coming. It was a great episode before the ending, but the ending solidified this episode as one of the best Fear the Walking Dead episodes to date, if not the best. Where do we go from here, and where is Madison? If she’s still alive, how’s she going to take the news? I missed reacting to it in Lara’s voicemail, but could Madison kill Charlie out of vengeance? So many of Madison’s actions have been to protect or find Nick. Then again, is Madison still alive? I know I had speculated she was dead last week, but I’m now finding it difficult to conceive of a show where they kill both Nick and Madison off. Who would lead the show after that? I see no good candidates that will ultimately work in that role.

What’s the Good Out Here consensus?

Like the first two episodes, the feedback on this episode is overwhelmingly positive, though not unanimous. Most people seem to like where the show is going but are floored by the death of Nick. I thought this was the best episode of the series.

Please leave your feedback by 6 PM Eastern/5 PM Central on Tuesday, May 8, 2018. We will be discussing Fear the Walking Dead Season 4 Episode 4, titled Buried. One of the best ways to send in your feedback is through our Facebook group!

Other Fun Stuff Completely Unrelated to Good Out Here!

We have the best listeners in all of podcasting! Please remember to subscribe to us on Apple Podcasts. Subscribing to us helps us move up in the rankings, so it’ll help us out tremendously! You’ll also get new episodes when they’re released. And while you’re in there, leave us a rating or review! It only takes a few minutes and it also helps us out!