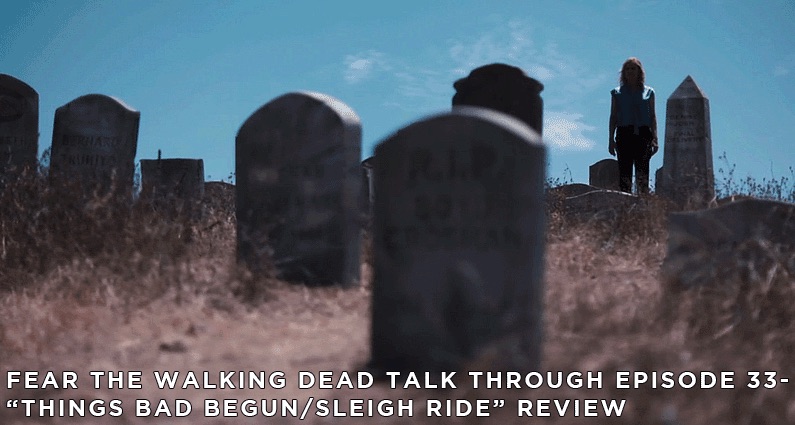 Well, we are at the end of the road… er Dam… with the finale of Season Three of Fear the Walking Dead. It’s been a fun ride with some let downs but overall this was one of the best that this show has produced. Drama, New Characters, Terrors, and some Feels. Madison had decent overall growth as a character. Her two kids, Nick and Alicia, did as well. But now with the end of Dave Erickson as showrunner and two new ones on the way. He sends us off into the wild vast alpaca lips.. um, Apocalypse. What does this mean for our characters (who as far as we know are still alive). Where did they go? Well, join Brian and Kyle and our special guest from the Facebook Group! Lara Wille-Swink joins us as we discuss all things in this episode of Fear the Walking Dead Talk Through Episode 15 Things Bad Begun and Episode 16 Sleigh Ride.

Ratings are up, and down

Things Bad Begun and Sleigh Ride’s ratings were given together. They got a 0.80 in the 18-49 demographic. This is a slight increase from 0.77 in the 18-49 but slightly lower than 2.231 million viewers from last week.

Leave your feedback for The Walking Dead next week!

The Walking Dead returns on Sunday! Please leave your feedback for The Walking Dead, Season 8 Episode 1, titled Mercy, by Tuesday 6 PM Eastern/5 PM Central. One of the best ways to submit feedback is on our Facebook group.