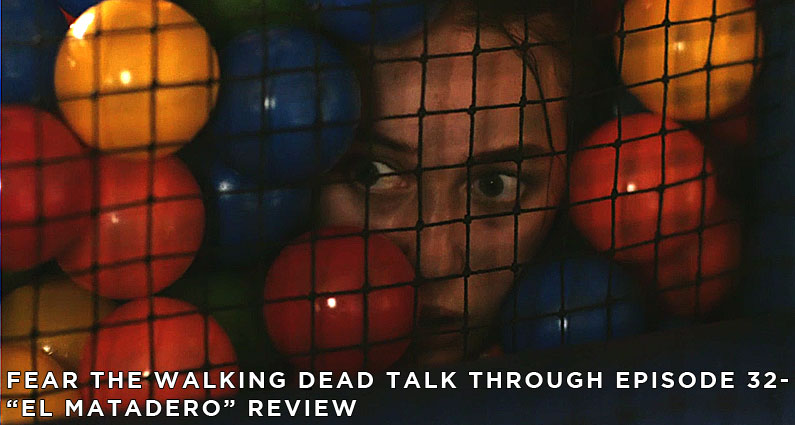 So, here we are, discussing the penultimate episode of Fear the Walking Dead (well, pre-penultimate, since episode 15-16 will be back to back on Sunday), namely S3E14 titled El Matadero, and splinters are emerging throughout our group of survivors. Alicia takes off on her own and discovers what we all know about children’s ball pits. Seriously, never ever get into one!!! Even more dangerous during a Zombie Apocalypse!!! Madison and the gang go back to this world’s version of a post-apocalyptic Costco to stock up and meet with Daniel. And, talk about not going as planned. Nick is all ‘Brain Stemming’ it up at the local Bazaar-o Drug Den, with Troy hesitantly joining and have a Fear and Loathing in Mexicali moment to enjoy. And Strand… dear Strand… what are you up to? Why do you seem to be up to no good?

We enjoyed this episode overall, but there were some issues and more questions that I hope we get answers to in the Season 3 finale. And, with the announcement about the Crossover Event coming sometime next year or next season, we discuss your feedback as well as our guesses on who the character from The Walking Dead is that’s joining our survivors on this show, or so the vast majority of us think the direction of this crossover will go, anyway. So join Brian and I as we discuss Fear the Walking Dead, Season 3, Episode 14, El Matadero.