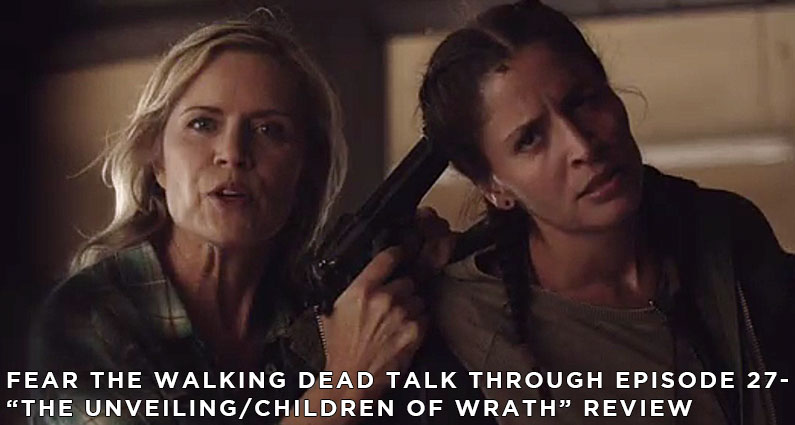 Talking Through The Unveiling/Children of Wrath

We survived this half-season of Fear the Walking Dead! Well, most of us survived. We got a pretty big reveal with our Madison Pie that explain at least some of her decision making. Now that Alicia and Nick know her deep dark secret, will this change the trajectory and do they stick with her until the bitter end? Only time will tell.

Ofelia is back, saved by Walker after her heat stroke Daniel sighting. She is reunited with the Clarks, but that didn’t go well. Is there still a survivor’s bond between them, or does Ofelia’s choice to back Walker break any leftover bonds? Jake almost gets a scalping and Troy goes on more murder runs, which, ultimately, leaves the Broke Jaw Ranch in tatters, and a leadership change is in store. Can a peace between the groups last, or will there be more hidden dangers beyond the horizon? Join us as we talk through the last two episodes of Season 3A of Fear the Walking Dead, The Unveiling and Children of Wrath.

Remember to leave us your feedback for the two-episode midseason premiere.

Other Fun Stuff Completely Unrelated to The Unveiling/Children of Wrath

Brian’s been asking for some help. Brian’s laptop had been having some hard drive issues while he and Ruthie recorded The Walking Dead 7B, so he started a GoFundMe campaign to help him out to buy a new solid-state drive (SSD), asking listeners if they could help him out a bit and donate to help pay for it. Well, over the hiatus, he found a deal on an SSD and put it on his credit card. So, he now has the drive, but he could still use help since he’s still paying for it. We appreciate all of your support! We have the best listeners in all of podcasting!