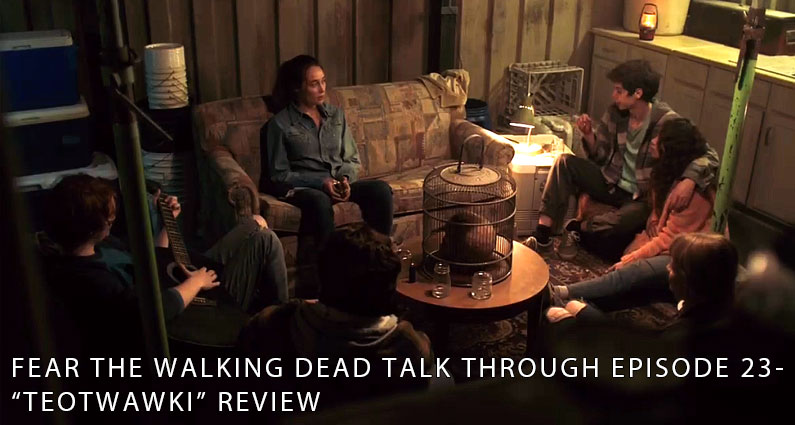 Brian and I discuss Fear the Walking Dead Season 3 Episode 3, titled TEOTWAWKI. It may feel like the end of the world as we know it, but this episode made us feel like there is so much more to come. Madison making some Mommy moves on Troy, Alicia is the cool girl at Bible school, and Nick making a crazy connection with the craziest guy we know. Oh and don’t forget ‘Strand The Man’ trying to con his way out of death. We are not even halfway through the first half of Season 3. Daniel makes an appearance, but we still don’t know what happened to Ofelia! Where is she!!!??? This episode really was a nice change of pace. Very little death but a lot of character developments that are looking promising. We love the feedback we are getting from our listeners and we want so more. So keep it coming! Remember to leave us your feedback. And join our Facebook group!

Ratings are down a little bit…

Please leave your feedback for Fear the Walking Dead, Season 3 Episode 4, titled 100, by Tuesday 6 PM Eastern/5 PM Central. One of the best ways to submit feedback is on our Facebook group.

Brian’s been asking for some help. Brian’s laptop had been having some hard drive issues while he and Ruthie recorded The Walking Dead 7B, so he started a GoFundMe campaign to help him out to buy a new solid-state drive (SSD), asking listeners if they could help him out a bit and donate to help pay for it. Well, over the hiatus, he found a deal on an SSD and put it on his credit card. So, he now has the drive, but he could still use help since he’s still paying for it. We appreciate all of your support! We have the best listeners in all of the podcast space!