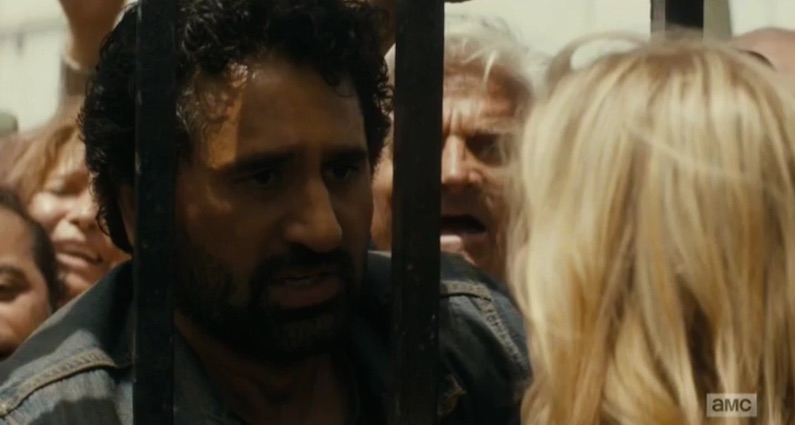 Talking Through Date of Death

It’s the penultimate week for Fear the Walking Dead, but Date of Death is not the penultimate episode. Not exactly. It depends on if you consider the two next week to be one episode or not. Personally, I think it will also depend on how they play out. Sometimes, two episodes can feel like one really long one, and sometimes, they really are two separate episodes. Since my crystal ball is still on backorder, I guess we will have to wait until this coming Sunday to find out.

In any case, Date of Death was a vast improvement over the previous week, at least for these two podcasters. This episode gave us the backstory on what happened with Travis and Chris after the ill-fated trip to the chicken farm. I rather feel bad for Lorenzo James Henrie because he seems like he would be so much fun, but I absolutely detest his character. I guess that means he’s doing his job well.

It’s worth repeating a few things

I’m glad that Travis is rid of the bro-migos, at least for the time being, but I feel bad for Travis that it was at the expense of his son. I do not feel bad for us. And how, unfortunately, I think that Travis lost Chris when he made the mistake of not bringing him back to the rest of his family. When he made that decision, he wasn’t being a parent to Chris, he was trying to be his friend. This backfired when Chris found new friends who wouldn’t also try to parent him. No one wants friends who boss you around all the time. I still think if Travis had not done what Chris wanted and had made the decision with his parent brain on instead, he would have taken Chris back to the rest of the group and they never would have been in that situation. But then we also wouldn’t have this drama for Travis.

Leave us your feedback and tell us what you think about the episode, and what you think will happen in the final two. Pretty please with a cherry on top, we wish for more audio! But we understand that maybe not as many of you are watching Fear, and for those who are, it may not be priority watching. For Fear the Walking Dead’s two-part season 2 finale, Season 2 Episode 14, titled Wrath, and Season 2 Episode 15, titled North, please submit your feedback by 6 PM Eastern/5 PM Central Tuesday, October 4, 2016.

Other Fun Stuff Completely Unrelated to Date of Death!

Brian’s Note: I would like to send a message to our subscribers and devoted listeners: If you feel so inclined, please check out Ruthie’s GoFundMe campaign. Her eight-year-old MacBook Pro that she uses to do our podcasts is dying fast. She needs a replacement computer to continue doing our shows in a bad way, and the sooner the better. She can’t afford to purchase one on her own right now without our help. 100% of the funds raised during this campaign will go toward the purchase of a new or refurbished Mac for Ruthie so she can keep on doing The Walking Dead Talk Through and Fear the Walking Dead Talk Through!. Any donation of ANY amount, no matter how small, will be appreciated! Thanks to those of you who have already contributed: Debbie, Linda, Malika, and Judii. I have also contributed and I intend on donating more every other week until there’s enough money raised to get her a computer. If you can’t afford to donate right now, she understands. You can help by sharing the link on social media to help get the word out so we can make our goal!